Medina Sends Kelly Back to the Retirement Home.. 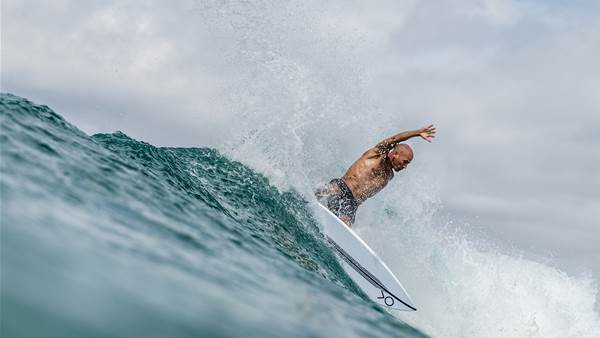 It's the question on everyones lips this week at the Quiksilver Pro on the Gold Coast... Is Kelly too old to compete?

With this year officially being Kellys last on tour, the 'groms' in the competitor tent are still trying to work out just how old he really is. 23? 50? They've got no idea. Even Kelly himself was ellusive, asking in this weeks 'Tour Notes'. "Ah, in real years, or surf years? In surf years, 40. In real years, 45."

Whether it's 45 or 40, whatever. The legend is more than twice the age of some of the guys on tour, but when Gabriel Medina knocked him out of the Quarter finals at the Quicksilver Pro this week, everyone was still surprised.

Medina almost got pinged for interference when he messed up a lip for Slater early in the round. He pulled into a barrel but didn't make it through, which set him up for the rest of the heat. Sure, there was a few of Kellys classic carves, but Medina had him. When asked about it all, Kelly brushed it off.

"I think you can approach it all with a lighthearted, fun time," he said.

"But it's almost like the whole thing carries this energy like it's intense. But my best of times, the contests that I've won the most easily in my life, have been ones where I was relaxed and stoked for the other guy in the water, even the guy I'm against, and if he gets a good wave I'm happy for him. That's the essence of surfing. I think you can surf competitions in that fashion."

Finals are this weekend, and Kelly will be up in the competitors tent hanging out. That's where we get to hear all the inside goss during #tournotes though, like where all this talk about Kelly 'being an old man' happened this week.