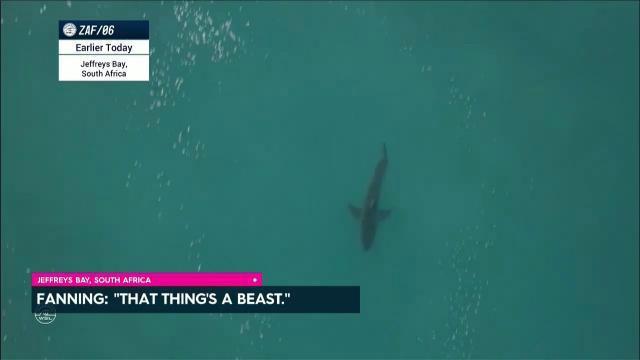 Just outside the lineup, this 3m Great White was making a bee-line for Fanning.
It's been a big week at J-Bay, with no shortage of headlines coming out of South Africa during one of the most watched surfing events of the year.

First it was Mick Fanning. AGAIN! With a Shark story during the Quarter final with Gabriel Medina. Aircraft spotted a 3m Great White cruising a few hundred meters down the beach from where they were surfing, sending jetskis speeding towards the two competitors. Once safely on board the jet ski, they tuned into a live feed from overhead.

"That thing's a beast!" whispered Fanning as he watched another ski chase it offshore. With the now-legendary shark from 2015 never being captured, was this the same one back for another round with the pro surfer? Nobody could tell, as we didn't really get a good look at it back then. This year, we did get a few shots of it, and it's been confirmed that yes, it was a 3m Great White. They do have memories you know!

Next up, Kelly Slater was down the beach having a free surf, when he tucked into a closeout barrel. No biggy, he's done it thousands of times, but this time, his surfboard smashed into his foot - bending it backwards and completely smashing two bones in his foot.

By smashed, we mean smashed. Check out the Instagram pic to see for yourself. It's not good, and right now Slater is on a plane back to the US for surgery. That means he's out for not only the J-Bay event, but Tahiti and every other event he had planned on attending for the next 3 months at least. It could even be worse, because those bones are going to take a long time to knit back together. All 10 pieces of them!

Finally, Filipe Toledo unwrapped the secret moves he's been hiding just for the J-Bay Open. Surfing in solitude for weeks, he ended up in a final with rookie Frederico Morais on Thursday. Making short work of Jordy Smith and Julian Wilson on his way to the finals, Filipe was understandably stoked to take the event. "I can't believe it," Filipe said. "J-Bay is always a contest that's been my dream to win. To surf perfect waves like this that we did the entire contest, I've got to thank god for the amazing week that we've had. I've got my entire family here and supporting me. It's unbelievable and I'm speechless. I think I might leave my hair like this for the rest of the year."

Next up on the world it's off to Tahiti for the Billabong Pro, where Kelly Slater was to defend his 2016 title. Now he's out of the running - it's anyone's guess who's going to be standing on top of the podium, and the world rankings!