Scubajet for Takeoffs and Self Rescue

Not able to post pictures yet but wanted to start a thread noting how it goes with a test...

I just mounted the jet on the bottom of the board in front of the mast. Hopefully can test it tomorrow to make sure it doesn't fall off, how heavy it feels paddling around, remote control functionality, etc.

I also have 2 of the boost fins on order which seem better to aid in surfing than this big heavy jet.

Any ideas on what to do with this stuff? I know people have wanted to try it out and I have seen BluePlanetSurf's video of efoiling with a scubajet near the foil.

Hey, mokesmax I love your thought process. I'm now pretty proficient at Wingfoiling and want to start sup foiling. My paddle technique is good but the waves I'm going to be surfing are fat and slow, fine when on foil but not when trying to paddle for it. The board I've ordered has an fcs box near the front to aid paddling in a straight line. I reckon 1 of those boost fins will slot in there and happy days!! Nice idea let me know how you go with the scuba jet. When does your Fin arrive, I see they are not sending new orders until june/July..

good on ya! i too have the boost on order -- same vision as you, get into waves that are not barely not paddle able. And also maybe get up on foil winging in winds just slightly too low to pump into. Kinda have my doubts it'll work, but we'll see.

I sent the boost guys my idea and asked about modifications, but they were completely uninterested. A little surprising, as it seems a valid potential use that could spread their market. And to be honest, one that's a lot less kooky than adding a jet on a surfboard, so it could add a little more cool factor perhaps. I intend to cut off fin tip as close to motor as I can, to minimize catching potential....but they wouldn't give me any input on how far down I can go.

You may want to check out this thread/forum: foil.zone/t/boost-surfing-fin-greatly-inspired-by-efoil/6561/19
That forum is mostly efoil DIY'rs, a few weighed in with ideas for custom designed versions of what we're proposing with boost.

Finally: I have had no interest in efoiling. Price tag is ridiculous and I hear they are heavy and too much drag to actually surf. However, now starting to see videos of some riders playing in waves and have to say, it looks pretty fun. No way I am spending $10k+ on a toy and if I was I'd buy a jetski. But did get my reptile brain reacting. :-)

Good thinking on the boost fin in the front box, I've seen Kalama boards with a front fin, looks promising. I'm not sure when they will ship, trying not to have expectations anymore on that lest I get disappointed. As far as trimming the fin I would think it's best to
keep It as is since their work right now is getting it all sealed up and the antenna working which is in the fin area (sounds like a tricky proposition).

efoiling is fun, I have done it once. Different than the rush of the wave though, can't beat that

good point...sure would be kooky to cut off the antenna.
I have a kalama-ish diy board that I installed a front fin on -- almost impossible to paddle straight without. I can experiment with boost fin there....but I think it will extend too far down, if it catches while foiling, that'll cause big wipeouts.
Maybe ideal to make next board without the usual sloped tail...back there might be optimal spot to install this.

Good point about a big Fin up front on touch downs, a small fcs Fin is different to the big boost job!
They did have an option for a stick on adapter/box which you could install in front of the foil box.

I don't mind adding another fin box on my diy frankenboards if it comes to that. But in front of mast seems like potential for drag too. In the end....those foilzone DIYs are probably optimal have it as low profile as possible (torpedo style) built onto mast base.

There was a prototype a couple years ago from maui guy (Brett Lickle) where he built a motor into the board itsel******idn't look like it worked very well, disappeared quick...but an interesting idea.

I took the setup out on the water today and it was interesting.

The mount definitely held the scuba jet on the board just fine. I had a thin leash from the jet to the mast in case it fell off.

As far as speed goes, it feels like when you start out motoring on an efoil and the board is on the water, but before you gas it up to get flying. I didn't have a speed meter, maybe should try setting the the Apple Watch to do that.

I had the 2400 wing, 300 tail and the 2 shim as well as mounting it almost all the way forward. This setup meant that the board would certainly fly with a small breaking wave, but I didn't have enough of those today to try it a lot. As far as flying without a breaking wave I can't say for sure - maybe some downwinders could explain what conditions are needed with the board to get flying from swells (i don't have any experience with that). I assume that this would be extra speed to normal paddling so getting flying would be based on skill and the swell?

One issue i had was the jet tended to slip in the sup mount that came with it. There is a little spring pin holding it in place on the track and I can only guess the slight play in the track and the movement of the board caused it to pull free. This meant that when it slipped it disconnected the Bluetooth extender which stopped the motor.

Probably if I can anchor the spring clip with something it would help.

As far as self rescue while winging - it definitely has that covered. You could lay or stand on the board and just "jet" upwind if needed. The weight of the jet while winging as well as terrible crashes when the tube touches the water on accident are still unknown factors. I will have to play with it some more and see how flying does (maybe with a boat to see how it handles in the air)

One interesting thought is that it makes you want more power - which means just buy an efoil to skip all this, but then you are limited on what sports you do with the setup. 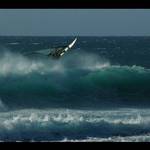 I wonder if it would work on a Towboogie style setup

That's a cool idea. One trick would be the Bluetooth connection - I would have to test the range with the watch to see if it would connect being whatever distance back.

I also wonder how to keep it in the water properly... maybe the existing towboogie setups have some examples

I took the beastly setup out again today with some better success. I took a piece of thin leash leader and used it to prevent the spring pin from moving once the scuba jet was on the board. This prevented it from dislodging when i was in the water.

Using the 2400, 72, 300 and extra lift shim i went out with a 7m duotone echo. Unfortunately there was basically no wind where i was so I couldn't do much. The great news was the scuba jet works awesome to motor around upwind or wherever needed. Just dial up the speed to move around - very nice

Because of the lack of wind i put the wing ding away and got the paddle out. There is a small reef far out from shore where i was so i motored over to it and played around. The waves were pretty terrible but i was able to fly the board with the scuba jet being used to help get into position. Basically takes the hard paddling out the picture, though the balance was still required due to the choppy water. The foil setup wasnt great for waves as it tends to buck quickly and harder to control with wave acceleration so i would plan to use the 1850 next time (or the opposite shim, 232, etc)

Coming back from the reef was the best part, just stand there and motor back to shore. You can be as lazy as you want assuming there is battery remaining.

Ways to improve - Bluetooth cuts out sometimes if the receiver gets washed over. Also being able to quickly shutoff the jet once flying would be helpful. Maybe a button type remote for the paddle would be good where you set the buttons to do what you need (off-50%-100%)

That one looks way nicer and purpose built! Love it 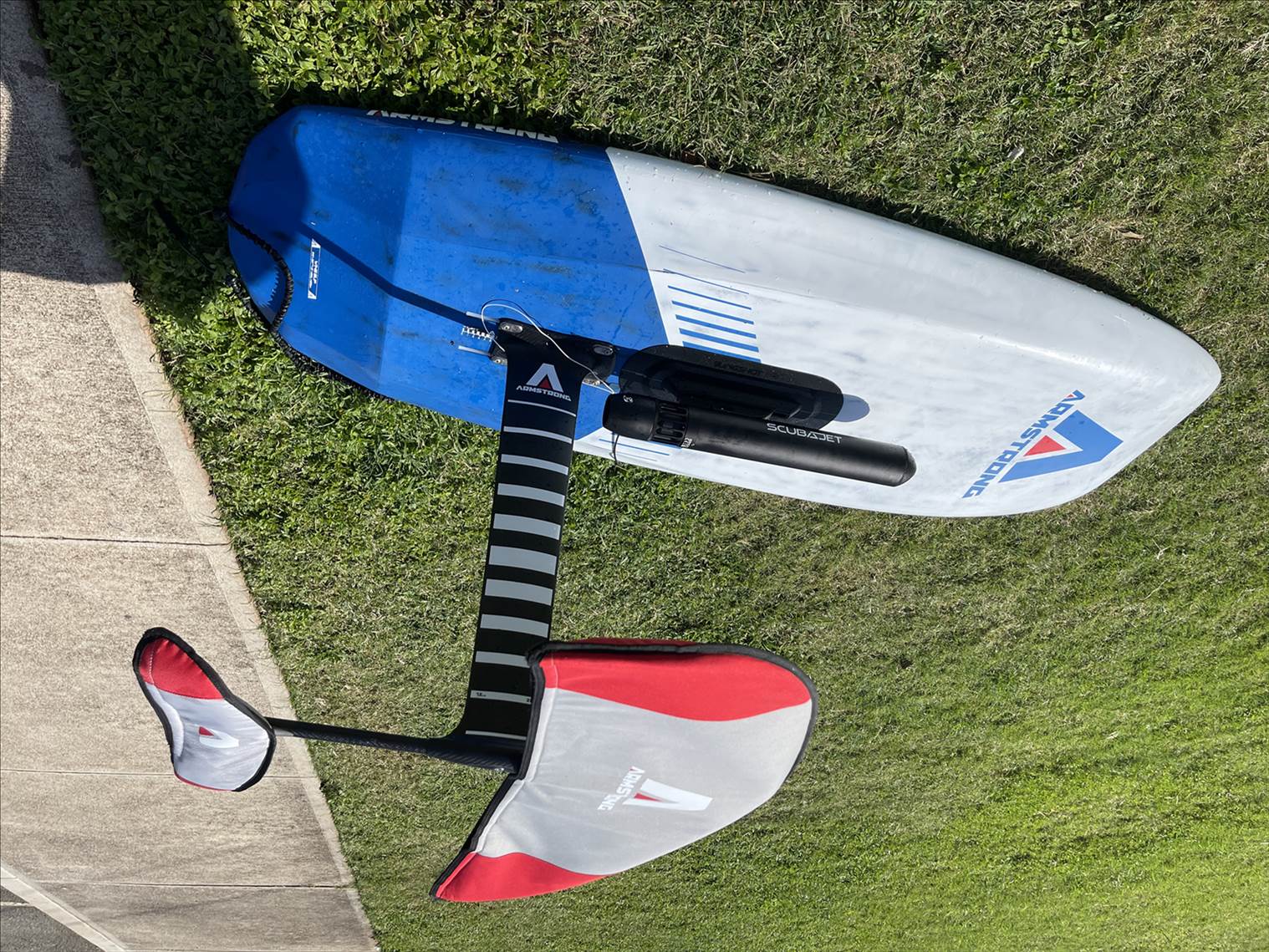 Select to expand quote
Hdip said..
www.instagram.com/p/CKRl5WLLVL7/?igshid=1ikou77xyco7d
looks like you guys are onto something.

Yeah, this looks really good. The Scubajet seems like overkill for what I'd want it for. Really for a momentary boost of energy to help you get the critical pointspeed required to get up on the foil Then once on the foil I don't want to know it's there. So I'm thinking it doesn't a big battery or even a big motor. RC electric motors apparently pump out, as a general rule of thumb, 3w per gram, so base motor weight of 100g for a 300w motor. Of course there are lots of add on bits, but if the whole unit were to weight in around 1 kg or t most 1.5kg mounted, you're hardly going to notice it.

Interesting, for me this idea of having an "electric propeler help" is the futur of downwinding.