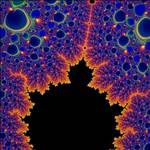 Have anyone tried new Patrik f-wave?

Any idea about weights?

He advertises them primarily as single fin, do they come with single fin? 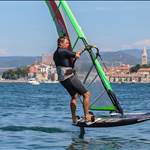 I have Patrik f-wave 85.
Light, nice to ride over the chop as single fin, easy jibing. They come with trifin setup. Didn't have the opportunity to use it in waves yet.
BR

What are the footpads like on the F-Wave? The website says "The 6mm thick over-dotted diamond groove grip pad has an extra 6mm soft sponge under-layer which makes it total 12mm and very nice and comfortable."
Sounds positive.
Are they of similar softness to Exocet & Tabou for instance? I've got Exocet boards and they make a difference to comfort.
TIA.


Select to expand quote
PhilUK said..
What are the footpads like on the F-Wave? The website says "The 6mm thick over-dotted diamond groove grip pad has an extra 6mm soft sponge under-layer which makes it total 12mm and very nice and comfortable."
Sounds positive.
Are they of similar softness to Exocet & Tabou for instance? I've got Exocet boards and they make a difference to comfort.
TIA.


Footpads are thick, two step as they say, not half built into the deck like on exocet, not as soft as exocet, but still soft in general, landings feel very soft and its very smooth over chop, i don't know if its the pads or boards shape though.

Still figuring out the trim, so these are just first impressions, i olso have a goya custom 3 pro 75lt so i will compare two. Reasons i got this board is goya does not like the 4.7 sail (or i couldn't find a trim yet), its not good on steep chop, it doesn't plane good enough in my local spots full onshore washing machine kind of beach break area (I haven't used it in those spots yet). It seems this board checked all 3 reasons so far :)

It is a bit heavier than goya with straps and fins, but still light. It has a bit more nose rocker and similar tail rocker. It has softer rails. Back foot area width is a little wider. Foot straps are soft and comfortable but they bend a little, goyas are sturdy and has a great connection feeling. Back foot position is much more forwards relative to back fin. Side slot fins can move good amount but still they are further apart from center fin compared to goya. Distance between front foot and mast track is about 8cm more. It has very closely drilled 4 strap holes instead of 3, olso a more inside line to change the angle of front foot slightly, you can find the perfect stance for sure.

It planes really early, like fsw board at least.
Goya is not slow but this is faster, and it gets to that speed easier.
Its much smoother over chop in general, butter smooth when railing upwind.
It carries 4.7 comfortably, mast track range looks more usable. They have similar float.
Upwind is not as good when not planing, but fine when powered up.
I had spinouts with original 8/18cm g10 fins using 4.7 sail, olso had some spinouts when landing jumps with 4.2, 20cm old dyno fin solved it, spinouts are not as easy to recover, goya (10/17cm soft fins) doesnt spinout just slides momentarily. I will try different fin configurations later.
I had a catapult to the nose, nose is strong :)
Turns are not as smooth nor as carvy, goya accelerates at turns, this doesn't.
I can rarely tack goya, this is much easier, i tacked more than half of tries.
They are equally good for jumping and in air but patriks landings are very smooth.

I will add pictures later. 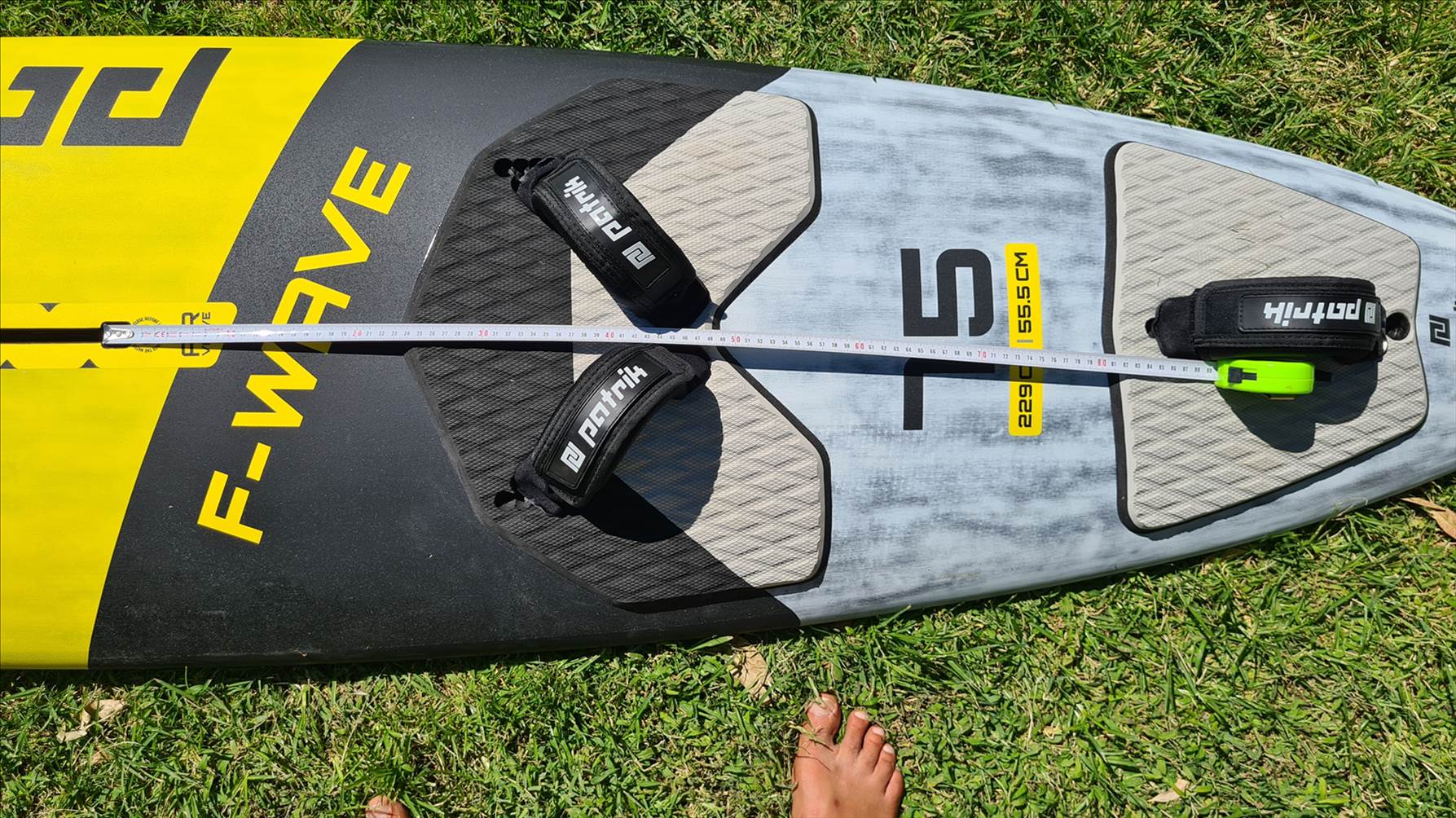 I use second holes from back, distance from front foot rear screw to back foot front screw is 42cm. Middle mast track position works well for 4.2 and 4.7 with about 1cm adjustment (i am 61kg). 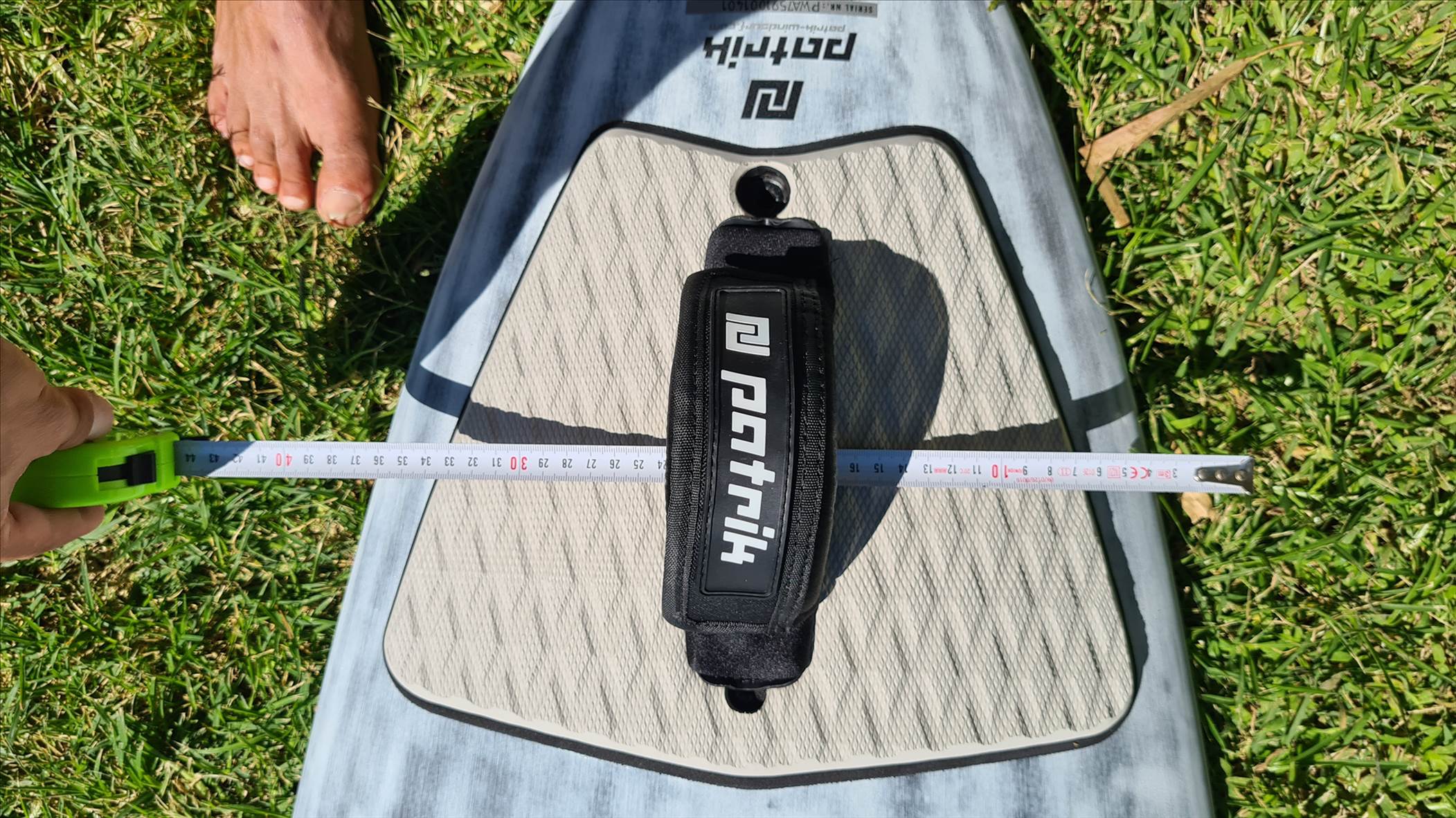 Picture is misleading, rear width is about 38cm 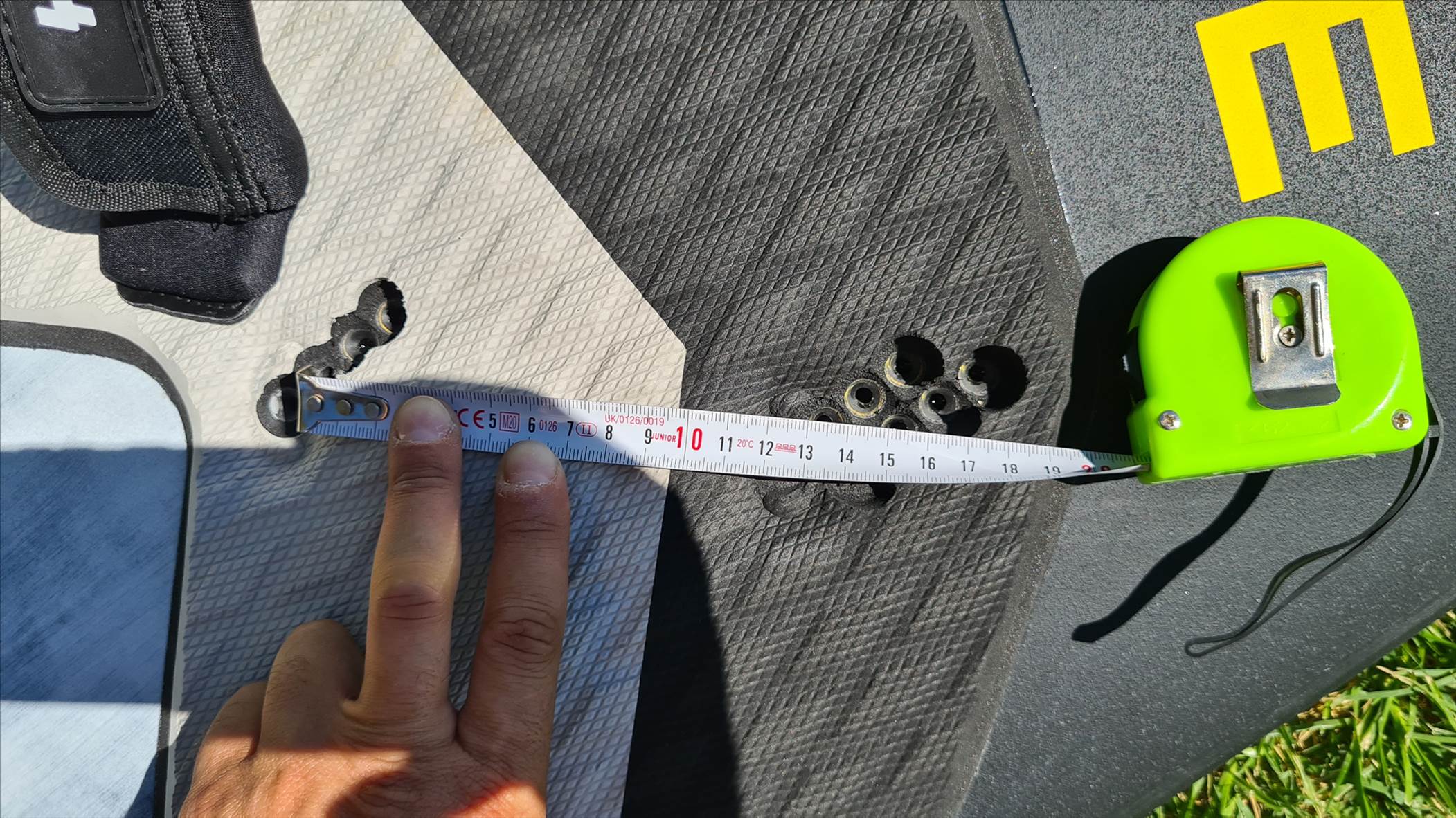 It seems i have very narrow feet, it felt better with 13,5cm, other is 15,5cm.
After checking again, bottom layer footpad is really very soft. 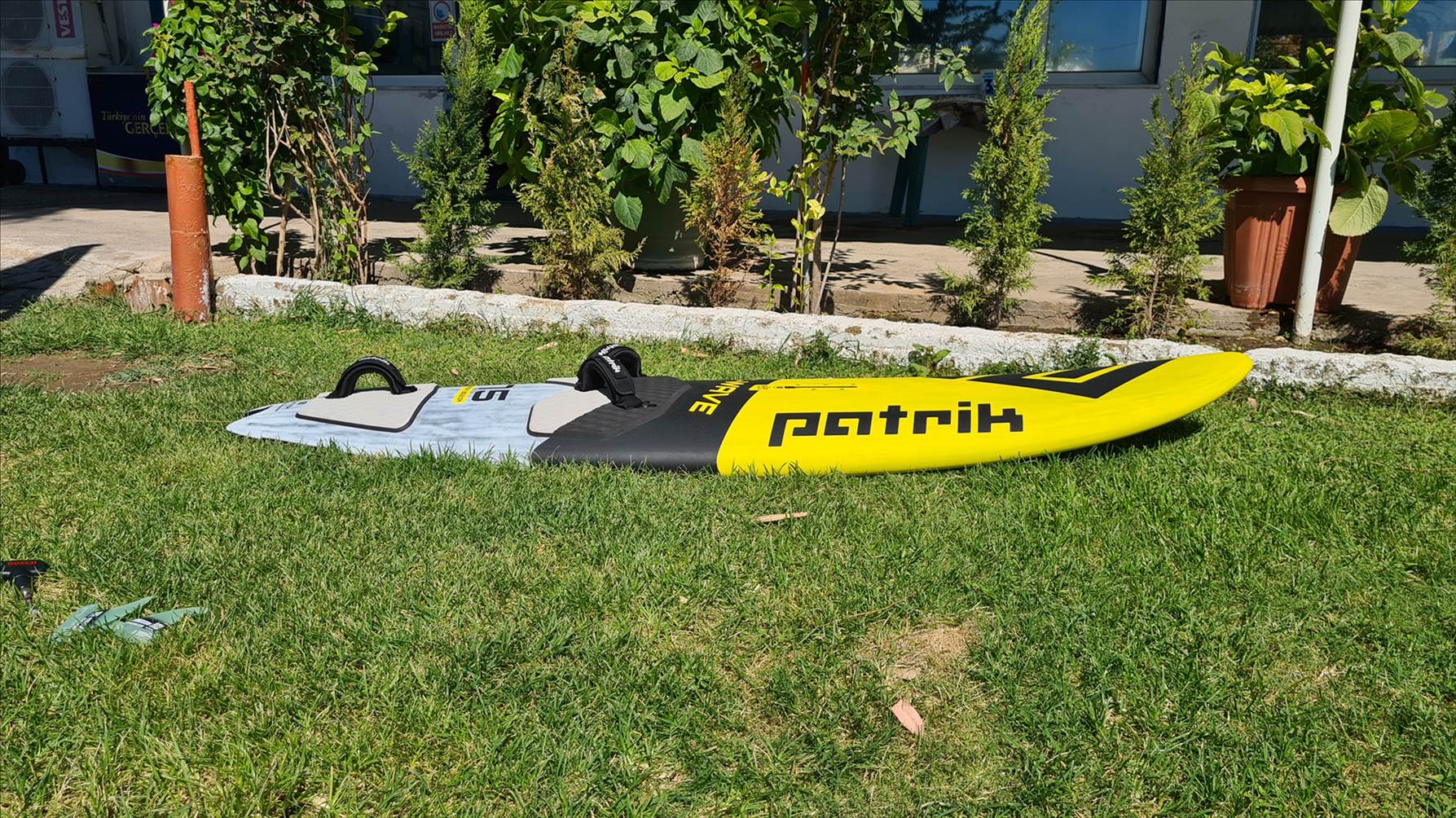 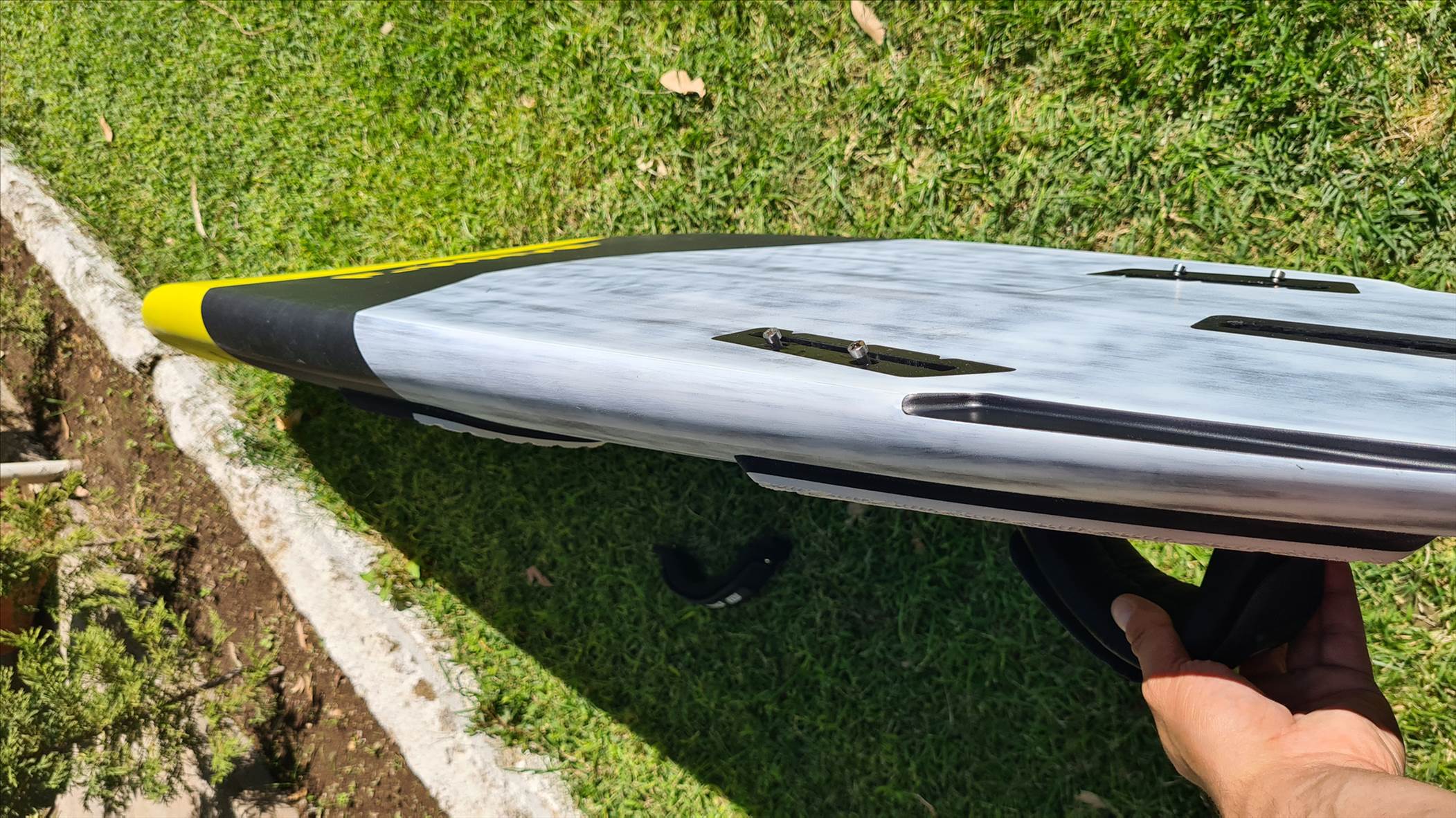 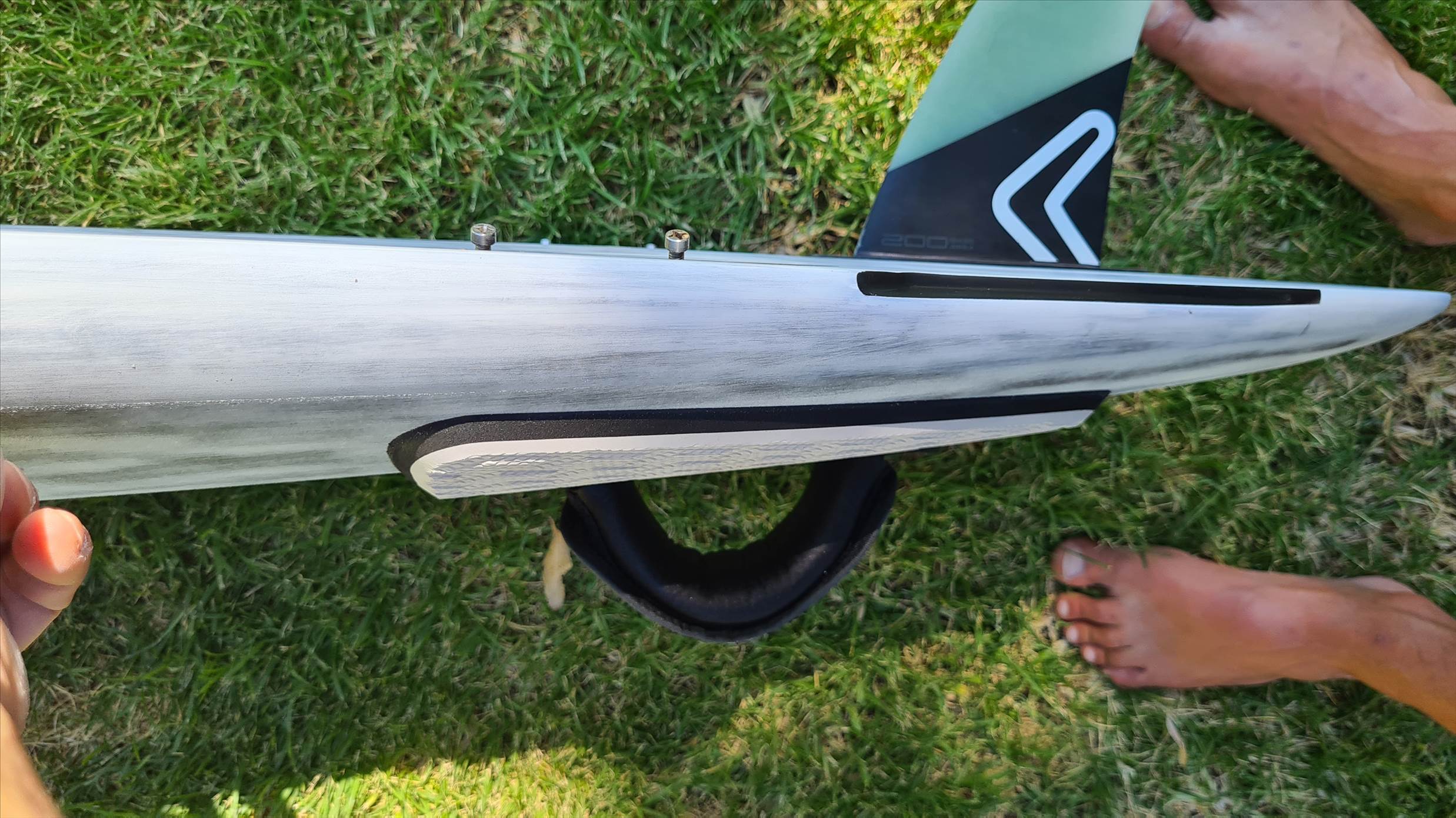 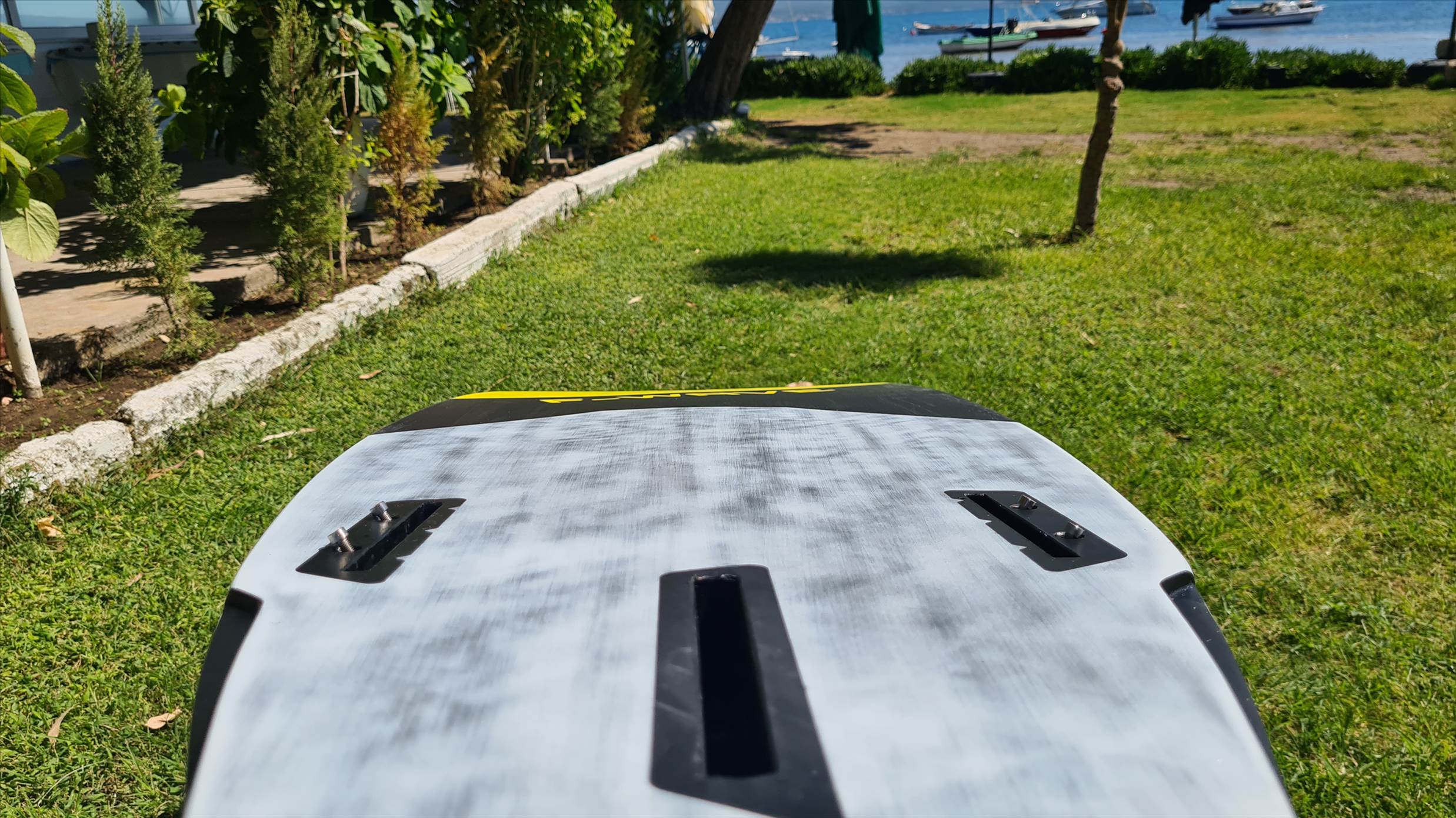 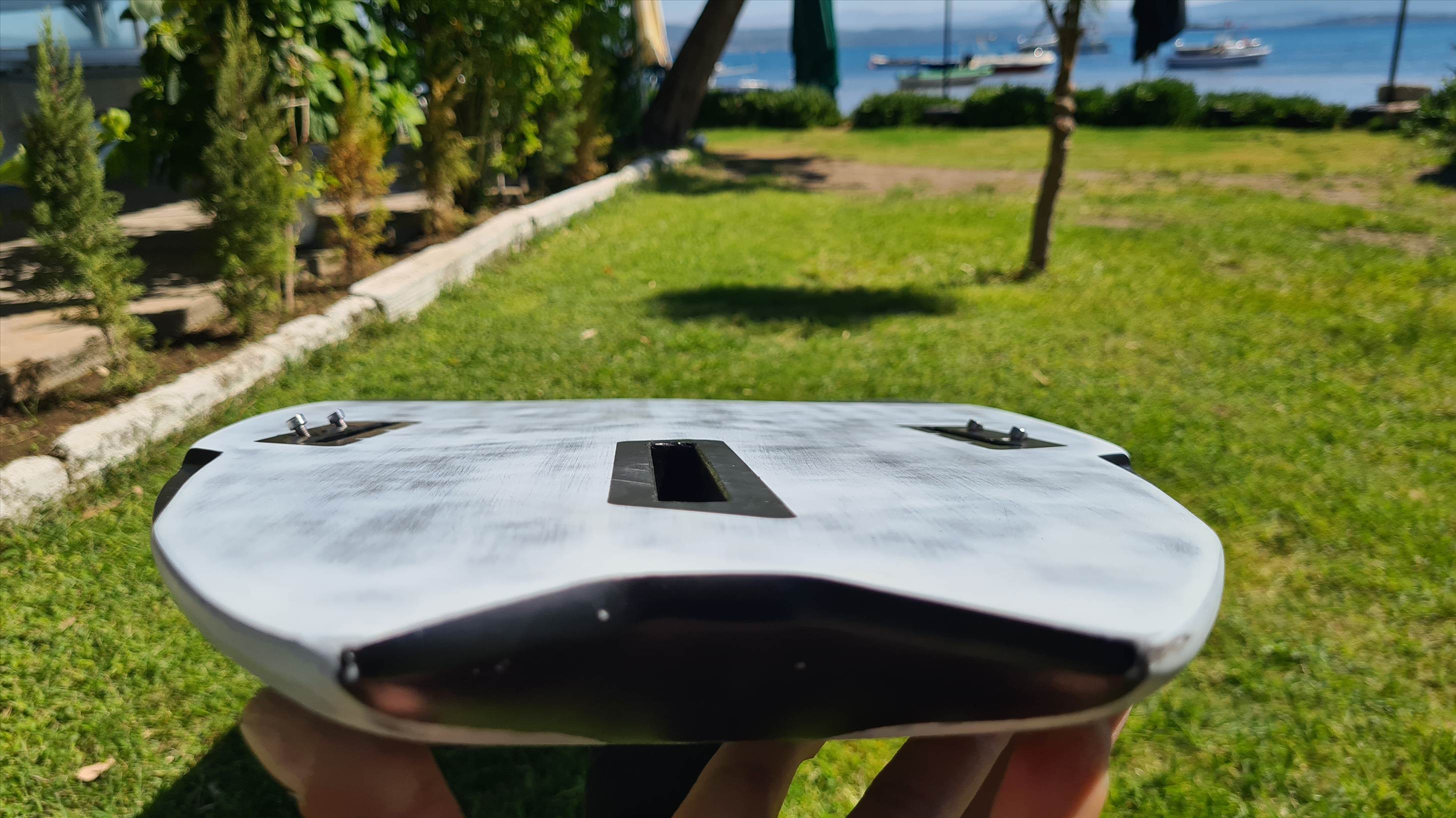 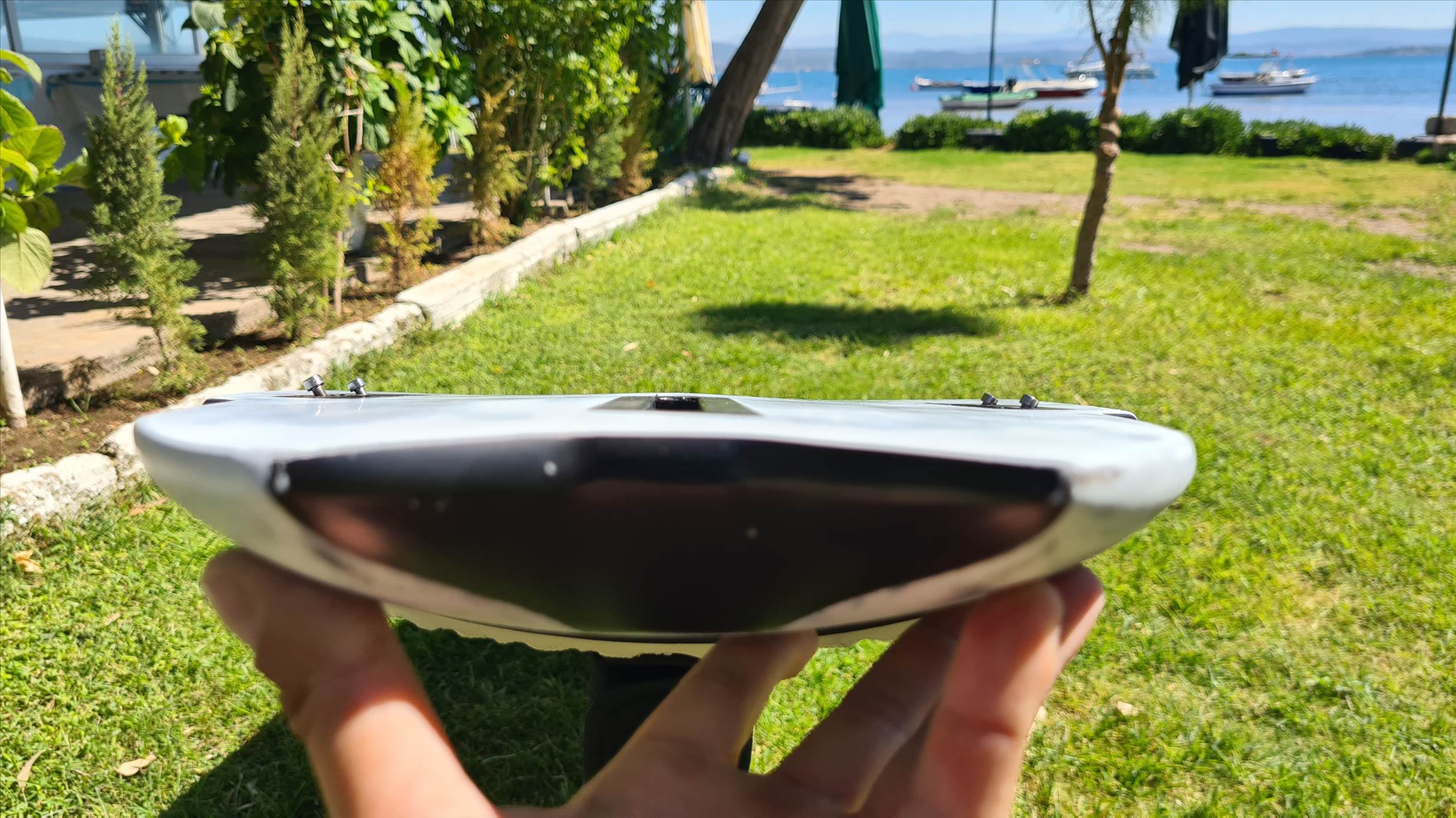 Looks good. Other than the cutouts, which probably have little affect as they are very small and wouldnt have much of an affect unless you are going fast. They dont have cutouts on their 100 & 110 F-Race, so why have them on a wave board? Its a minor detail though.

Keep us up to date on how it performs, good and bad.
I've seen user reviews where they bang on all the time on how its the best board ever but then they dont tell us when the board construction fails and its replacement is out of weight spec and they have dumped it onto someone else. It makes everything they then say not trustworthy. Sometimes its the bad stuff that is more worthwhile to say than the good stuff.

Tried the board with 21cm dyno v2 fin as single fin, 4.2 blade powered up.

Blanks for side slots could be lighter, they are heavy, but work well.
Board felt very free, easy to move around while speeding.
It bounced more over chop but it was olso more choppy today so not sure about that.
Surprisingly for me, it went upwind much better, i could push high angles, without railing needed. No spinouts in general, only few from bad landings.
I couldn't feel much difference in speed or early planing.
It turned pretty well in general, close to tri fin setup, there was some wind swell today, it turned sharp on waves. It bounced and i lost the rail once while jibing on chop with high speed, trifin may have saved that mistake.

Its a good option, not sure which one i like more for now, probably trifin after more experimenting.

Select to expand quote
Grantmac said..
Those seem less like cut-outs and more like a winger tail?

Yes looks like that, maybe works so as well, but Patrik says its for speed. 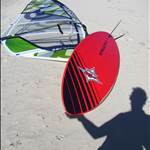 Any idea about weights?

He advertises them primarily as single fin, do they come with single fin?

They do come with fins as per the web site.
Please Register, or Login first...