Some people on these fora are showing really nice Youtube and Vimeo videos. In our sport we are always want to see our speeds, tracks, distances, and max speeds. Why not shows these in real time right on the screen in the videos?

Some videos do shows these things.

Question. So how they get those very cool real-time live speedometer and track guages right on the screen?

Answer. They use pretty much any action cam and some kind of GPS logger, such as a GPS watch, along with GPS overlay video editing software.

Better answer. They use a GPS-enabled action camera and have both video and onboard GPS logging in one compact package, along with GPS overlay video editing software.

Here below is a review and commentary about four GPS-enabled cameras and five GPS-enabled video editing programs.

There are dozens of action cams out there that include onboard GPS. I experimented with the (1) GoPro 5 Black, the (2) Contour Plus, the (3) Garmin Virb XE, and the (4) Sony HDR-AS30V. All work fine to record video and collect GPS data. GoPro models Hero 5 Black and later all have GPS. Some models of Contour later than the Plus, and some models of the Sony later than the HDR-AS30V, have GPS. Most Garmin models from the Virb and later have GPS. You should definitely check before purchasing. Don't purchase a camera without onboard GPS. You will kick yourself.

(1) The GoPro 5 Black produces .mp4 video files with embedded GPS data inside the video files. It is waterproof without an additional case.

(2) The Contour Plus produces .mov video files with embedded GPS data inside the video files. It requires a waterproof case.

(3) The Garmin Virb XE produces .mp4 video files and separate .fit files simultaneously for GPS. It is waterproof without an additional case.

(4) The Sony HDR-AS30V produces .mp4 video files and separate .nmea format files simultaneously for GPS. It is waterproof inside its very compact case.

These cameras, along with appropriate editing software, create videos with real-time live GPS overlays right on the screen. The overlays can display (a) real-time speed, (b) GPS track, (c) distance covered, and (d) maximum speed. These four overlays are the most useful for our sport. Other overlays are also available but not all that useful for windsurfing/foiling/kiting.

The software uses the term "gauge" for overlays. We want to see an exact live synch of the respective GPS gauges with the events on the video. For example, we want to see that a jibe in the video is exactly synched to the sharp turn on the GPS track gauge and to the speed gauge.

(1) GoPro Quik (Windows (v10 only) and MacOS) works only with GoPro cameras and has OK but limited GPS gauge content of interest to our sport: track and speed.

(2) Garmin Virb Edit (Windows and MacOS) works with any camera, or with downloaded video files and separate GPS files for manual synch. It offers all four gauges of interest, and a few others.

(3) Sony Play Memories Home (Windows and MacOS) works with any camera, or with downloaded video files and separate GPS files for manual synch. It has OK but limited GPS gauge content: track and speed, and a few others.

(4) Dashware (Windows and MacOS VM) works with any camera, or with downloaded video files and separate GPS files for manual synch. It offers all four gauges of interest, and many others. Dashware automatically recognizes embedded GPS data in the Contour Plus and GoPro 5 Black, and extracts and synchs automatically. If a camera created multiple files in sequence, Dashware senses it and offers the ability to merge them into one file with GPS continuity. But watch out; if the final processed file is bigger than 4 gb, it will not play.

Note: Dashware reads only version 1 of the .fit file format, but not version 2. The Garmin Virb XE and many watches produce version 2, so you have to run the .fit file through Garmin software to convert to .gpx, which Dashware does read. This works, but the extra steps make things more complicated. (Dashware was originally developed by GoPro, but was frozen at version 1.9.1. when they went to GoPro Studio and Quik. It is still available for download.)

The maximum speed gauge in Dashware is a little wonky. It reads the entire file first and displays the maximum speed as one unchanging number during the course of the video. It works with the Contour Plus, but not the GoPro 5 Black.

(5) Race Render (Windows and MacOS) is not free, but does have a trial with limited capability. To get everything unlimited you pay a modest one-time registration fee. Then it works with any camera, or with downloaded video files and separate GPS files for manual synch. It offers all four gauges of interest, and many others. Race Render automatically recognizes embedded GPS data in the Contour Plus and GoPro 5 Black, and extracts and synchs it automatically. Race Render reads .fit v1 and v2 directly. If a camera created multiple files in sequence, Race Render senses it and offers the ability to merge them into one file with GPS continuity.

The maximum speed gauge in Race Render works correctly by showing the accumulated maximum speed from start to finish. This works fine for both Contour Plus and GoPro 5 Black.

The Contour Plus and GoPro 5 Black cameras are the easiest to use and process due to their embedded GPS data inside the video files. The Contour Plus is bigger and heavier due to its required waterproof case.

Race Render is the most useful, offers the gauges we want, reads the most file formats, automatically extracts embedded GPS data, and automatically synchs. It also offers manual synch of separate GPS files. The maximum speed gauge works the way we want.

Dashware is a close second. It offers the gauges we want, reads many file formats except .fit v2, automatically extracts embedded GPS data, and automatically synchs. It also offers manual synch of separate GPS files. Its maximum speed gauge works only for the Contour plus.

The first Youtube here shows the Contour Plus mounted to the boom. Video processed by Dashware. Note that max speed is fixed at the maximum speed point found in the complete file, but the distance gauge accumulates correctly.

The next Youtube here shows the GoPro 5 Black mounted on the helmet. Video processed by Race Render. Note that max speed builds from zero to the highest value DURING the run and latches there. The distance gauge accumulates correctly.

For our sport the following video settings work well and produce small files:

These lower settings are well suited for archiving videos or uploading to Youtube. Any higher resolutions or faster rates are wasted for our purposes unless you want to watch your videos on your own 60" 4k TV. The Youtubes above were made with these lower settings.

The FAT32 system on the ?sd cards in cameras has a single file size limit of 4 gb, which is about 35 minutes at 720p, 30fps, wide FOV, image stabilization OFF. If you limit individual recordings to about 20 minutes, the resulting processed video files will stay safely under the 4 gb limit. Some cameras automatically break the recording into multiple video files that are smaller than 4 gb each, but retain GPS continuity. You should test all this with your camera and video software to make sure you don't lose anything by recording for too long a time.

That said, out on the water it is not difficult to stop sailing after 20 minutes but stay out there, turn off the recording, and immediately turn it back on again to start the next 20 minute recording. Each turn-on starts a new file.

I experimented with a single 45 minute windfoiling session with the GoPro 5 Black making one long recording at 720p, 30fps, wide FOV, image stabilization OFF. The GoPro 5 Black automatically produced two .mp4 files: 3.72gb and 2.08gb for a total of 5.08gb. Using Race Render and Dashware we merged the two files and created final videos with the gauges. After processing, the final Race Render video was 3.08gb, and the final Dashware video was 5.02gb. Since the Dashware video was bigger than 4gb, it would not play. Obviously, Race Render ran a compression on the final video so that it would play.

If you want GPS data that meet GPSTC requirements, stick with what has been already proven, such as the Locosys units or the Motion. Some cameras reportedly use doppler, but you would have to verify this with your camera. The Contour Plus, for example, does collect HDOP data.

My default go-to camera and software is the GoPro 5 Black at 720p, 30fps, "Wide" FOV, image stabilization OFF, mounted on the boom or helmet, and Race Render. 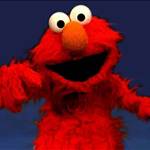 I have a Sony action cam which has limited speedo's.

So I use Dashware which allows me to make custom speedo's 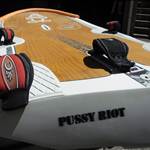 Anyone using Linux ? is the software compatible or usable with Wine? 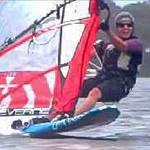 Can the gauges be set to read knots rather than kms or mph ? 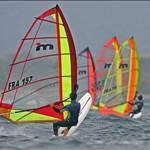 Select to expand quote
sboardcrazy said..
Can the gauges be set to read knots rather than kms or mph ? 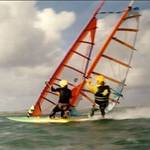 There does not seem to be a Mac version of the Sony app. Did I miss something? 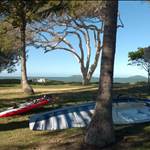 Correct. I did not see a Mac version of Sony software. However, Dashware and Race Render read Sony video and gps files just fine.

I have Linux, but I use Windows for all this stuff. I cut my teeth on old CP/M and DOS and then every version of Windows that came along. Mac software is a complete mystery.

I don't worry much about shock resistance in a camera in our sport. Water impact during hard crashes has never damaged anything of mine, but it has damaged me a couple times. I would think shock resistance is more important for biking or running than for our on-water sports. I have no idea whether you can get a case for an already waterproof GoPro camera.