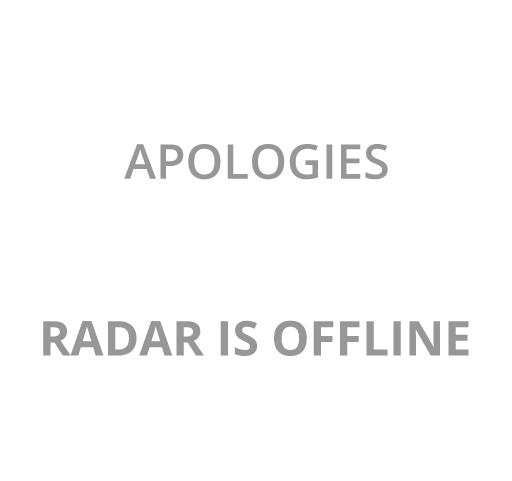 The Gippsland radar is situated on the coastal plain at the airport about nine kilometres south-west of the city of Bairnsdale. The Great Dividing Range, stretching east to west north of the radar, regularly reaches 1000 m in elevation, with many ridges exceeding 1500 m and peaking at 1986 m at Mt. Bogong approximately 130 km to the north-north-west.

This location provides good coverage of nearly all of the catchments of rivers flowing south from the Great Dividing Range. The radar's standard coverage, taken as the maximum range at which rainfall can be detected at 3000 m altitude, extends to the east as far as Gabo Island, south to the northern tip of Flinders Island, and west to the eastern shores of Westernport Bay. Inland from the west through north to the east, the coverage is reduced by the Great Dividing Range along an arc from Marysville, to just south of Bright and Mount Bogong, the headwaters of the Murray River and then through to Delegate and back to Gabo Island. The radar is well situated to provide weather watch for south eastern Victoria from the crest of the Great Dividing Range along the coastal plains of east, central and west Gippsland and eastern Bass Strait. The radar's coverage overlaps the Melbourne radar by about 100 km and these two radars provide contiguous coverage from Cape Otway in the west through to Gabo Island in the east. Summer thunderstorms that develop on the surrounding hills and mountains may be observed in detail. Cold fronts and low pressure systems with their associated rain and thunderstorms may be effectively detected as they approach from the northwest, through west and south or develop over eastern Bass Strait.

In most cases the processing of the radar signal removes permanent echoes caused by obstructions such as hills, buildings and other solid objects. Occasionally, some permanent echoes will not be completely removed from the display. These echoes usually occur as isolated, stationary patches along the Great Dividing Range, the Strzeleki Ranges and the peaks on Wilson's Promontory. These usually become more noticeable on cold, clear, winter nights or early winter mornings when cold air lies near the land's surface. Because the radar has an unobstructed view of Bass Strait and also parts of the Gippsland Lakes; 'sea-clutter', due to waves, may be seen over these waters during strong winds out to about 25km from the coast. These echoes may be distinguished from rain as they do not move with the wind and end abruptly at the shoreline. Sea clutter may become more prominent when hot northerly winds blow over these cooler waters. Occasionally, particularly when it is cool, ships can produce radar echoes, which often appear as small areas of high intensity rainfall. Because the ships are moving, they can not be automatically removed by the permanent echo filter.
VIC - Bairnsdale
Bairnsdale Weather
Bairnsdale Yesterday
Last 30 days
My Weather
VIC - West Coast
Today
Yesterday
VIC - East Coast
Today
Yesterday
Weather Extras
Bairnsdale Moon Phases
Bairnsdale Sunrise/Sunset
Bairnsdale Rain Radar
Melbourne Marine Forecast
VIC Sea Temperature
VIC Tides
Synoptic Charts
Satellite Images
Events Calendar
Members
My Messages
My Adverts
My Alerts
Help
The Graphs
Arrow Colours
Alerts
Bairnsdale Astronomy
Tide Times
Weather Legend

Arrows are where the wind is going. Compass legend inside each graph.