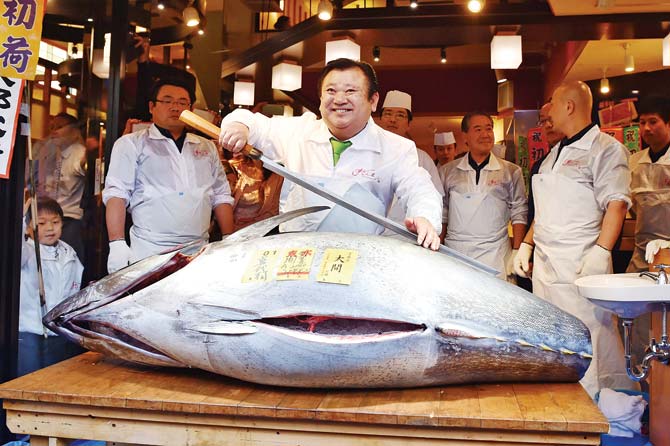 Have you every caught a Tuna? They can be big, they're fun to catch and best of all, catching one is free.

Buying one, is not free; and while some would argue that no fishing trip is free and they're actually quite expensive. They don't cost the equivalent of $870,000 AUD. That's what Kiyoshi Kimura paid for one fish at Tokyo's Tsukiji Fish Market this week, starting off the year's fish auctions with a healthy cash injection.

"I feel it was a bit expensive, but I am happy that I was able to successfully win at auction a tuna of good shape and size," Mr Kimura said.

To be fair, it was a pretty big fish. 212kg worth of Bluefin Tuna, prized, rare and exceptionally good in Sushi, but it's still almost a million bucks! As of now, the average price per kilo of Bluefin Tuna is about $25, putting the same fish at just over $5000 market value.

This isn't the first time he's paid top dollar for a big Tuna either. In fact, he calls himself the Tuna King of Japan, paying a record $2.46 million for one fish back in 2013. 6 Years running now he's bought the first fish of the Auction, writing it off as an expense for his chain of incredibly popular Sushi chains in Japan.

That's where all the fish is going by the way, sectioned up and sent off to each store to be used in every-day sushi, which sells for $4.60 a plate. If only those customers knew how much the Tuna actually cost!