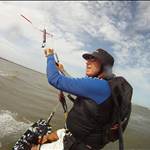 Rider: Intermediate, 78kg,Level 3 years exp
Style: Freeriding
Weather: 10-12 knots
Build Quality: 10/10
Satisfaction: 10/10
Disclosure: N/A
Location - Brighton QLD
My Comments:
Fly Surfer Fly Race initial impressions: Day 1 - 2hrs,firstly the flyracer demands a new techique to launch out of the water,once this was achieved the flyrace directional control was very very good. When in deep water I gradually lowered the centre fin, I found that the board become progressively Hiper sensitive to any board input.
As I progressed to extending the fin to half way I found that the boards upwind performance was unbelievable (outstanding) and will require further practise to adopt the correct stance and techique before I can start being for comfortable and compentant in its use. I shared the board with a more experience( past wind surfer) Jason ( Big Fella) for a broader assessment of this board with him aggreeing to the above. Both of us confirmed that you need a good footing into the special footpads to estabish adequate control and the full capability of this board. At the end of the session both of us become familiar with the different characteristics and performance level of this board which can only increase with more use. I was asked to compare this board to the Noble Magic Carpet, to which I concluded that the Carpet is a plug and play style of light wind board and has no relationship with the capabilities and performance of the Fly Surfer -FlyRace Board. Reveiw to continue. Graham (GB)

Thank you for this review! There's not much information out there on this board yet. Eagerly await further impressions. 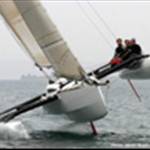 I had a go on this board a couple of weeks ago ,wind was 10-15 kts and was on a 17m contra .( was already out there on my twin tip and got handed the board off GB) .Only took a couple of minutes to find the groove , started out going up wind with the centerboard about half way down.felt solid pointing upwind and was pointing 20-30 degrees higher than anyone else out there (no other raceboards).
After a couple of shunts ( not a tack or a gybe more like a shunt that a proa does) got a little gamer and dropped the centerboard down some more,instantly you can feel the lift generated off the foil ,To the point where I was way overpowered on the big 17m with the board all the way down ,I think the kite was too big and the centerboard was generating too much lift for the power the kite was making.I fixed this simply by pulling the board up a couple of inches.

After a couple of fair size tacks upwind ,I found myself perhaps a km up wind of where I started in no time at all ,and with frightening eze.
Time to turn for home ,I noticed unless you get the board up ,this weapon is a handfull off the wind ,The more centerboard you get up the better ,all the way up the board is very controlable and slides downwind as easy as it goes up wind.

I can see these boards really taking off in the race scene ,very user friendly ,simple to get around a coarse without having to tack/gybe a directional ,and first inpressions is that it is very quick at all angles of the wind .( not sure speed wise how it would stack up to a directional raceboard ) but on a directional if you were to stuff a couple of tacks and gybes I think and average sailor on a Flyrace would be right up your backside.

Looking forward to give this board a bit more of a workout,so far very impressed.

Thanks again GB for the ride.