I've been a lurker here for a while, but now I need some help with my Sirocco. I picked up a Sirocco Sprint last year and have used it successfully only 2 or 3 times when I initially got it (I've since gotten a Blokart which gets the most time). It simply does not want to move. I took it out today in good 18mph wind which is more than enough for its 4.2 m sail. It would almost rather tip over than move forward. I am very frustrated with this sailer. I know that it is capable of sailing well, as I've used it in the past , but just won't go now.

I have tried moving the sail up and down the mast and it is currently down as close to the boom as possible; no luck. There aren't many way a LS can be set up, so what is my problem??? Any hints/ tips? 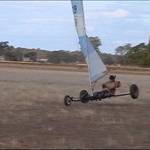 If you've successfully sailed with it before then I'm a little unsure. Seized wheel bearings, wheel alignment issues, flat tyres??? Some images of it set up might help.

I remember when I started sailing I couldn't figure out how to get the dang things moving initially....

Maybe sail shape is the cause Does the sail have a leech that is hooked and does not let the air flow off the sail properly ? Do you have another sail you could try? Some photos would help others make a suggestion 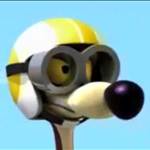 Often people will set the sail VERY flat..... sails used in light to medium winds or on soft surfaces need considerable draft (150mm-300mm)
Flat sails give you speed but not much 'grunt', full sails give the 'grunt' to get up and going or in light winds.
Tire pressure is also quite critical.... firm to hard inflation is needed.