Looking for flatwater 4 in 1

3 year SUP'er getting into foiling and wanting to windsurf too. Inland lake in midwestern US (Indiana) with light winds mostly. Have a wind wing and just purchased a Neil Pryde Glide foil.
Most of the 4 in 1 boards are wave designed first it seems. One exception being the Slingshot Flyer 280 (at 11'6" and 280l) which seems to be the BEST to learn on but then quickly passed by for smaller, shorter boards once you learn to foil. We are at the lake every weekend in the short summer and we also have an elevated reservoir 20 minutes from me that gets more wind being 40' up. So I'll be able to devote enough time to learning over the summer.
I'd rather a steeper learning curve rather than outgrowing a "Learner" board in short order.
I have a RedPaddleCo 13'2" isup now and just sold two Bodyglove cheapies that we first learned on. Want some real rails, feet in the water and ability to turn the board. The RPC being 300L I hesitate to get another board with such high flotation and similar length. (280 is 7" thick!)
I am 90k so not sure that the 120ishL of most 4 in 1's (Fanatic Stubby Foil, F-One Pampanoo, Starboard Hypernut 4 in 1) is enough for me given the light wind (dying to no wind) nature and uphauling a windsurf rig. ??
Ideally I'd like a 150L or so I think, but that just doesn't seem to be out there in a 4 in 1.
I"ve read foreign accounts of a larger Pampanoo this year - 8' and 140ish L but I can't find any information on it in the US.

In another discussion it was mentioned the bottom design of this very pretty SIC Marlin (new model) would not be good on waves, and I'm wondering if that means (by default) that it might be better in flatwater situations. (it has a center channel down the board, in part to keep the foil mount at 90 degrees) ???????????
Thanks for any educated input. 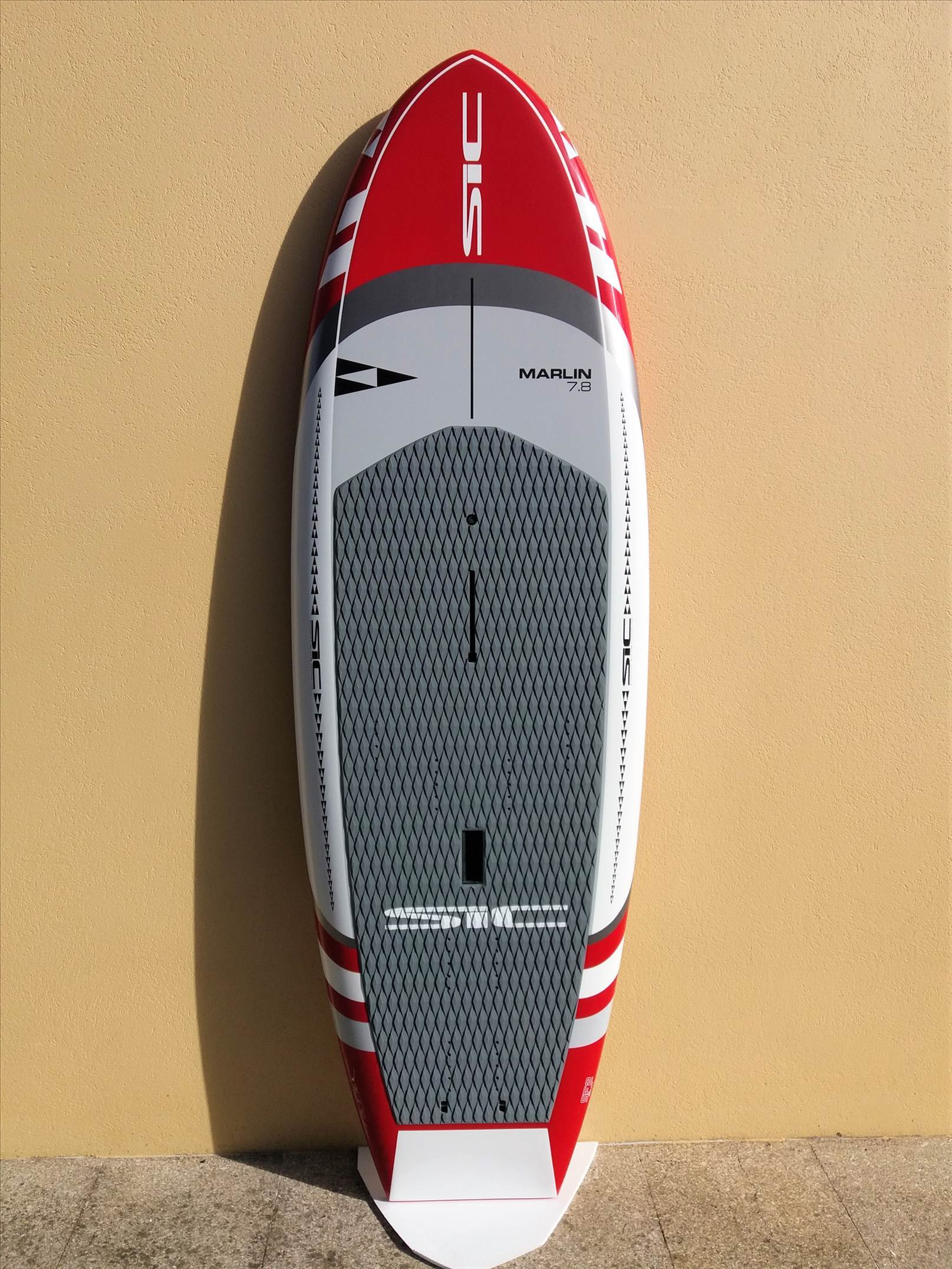 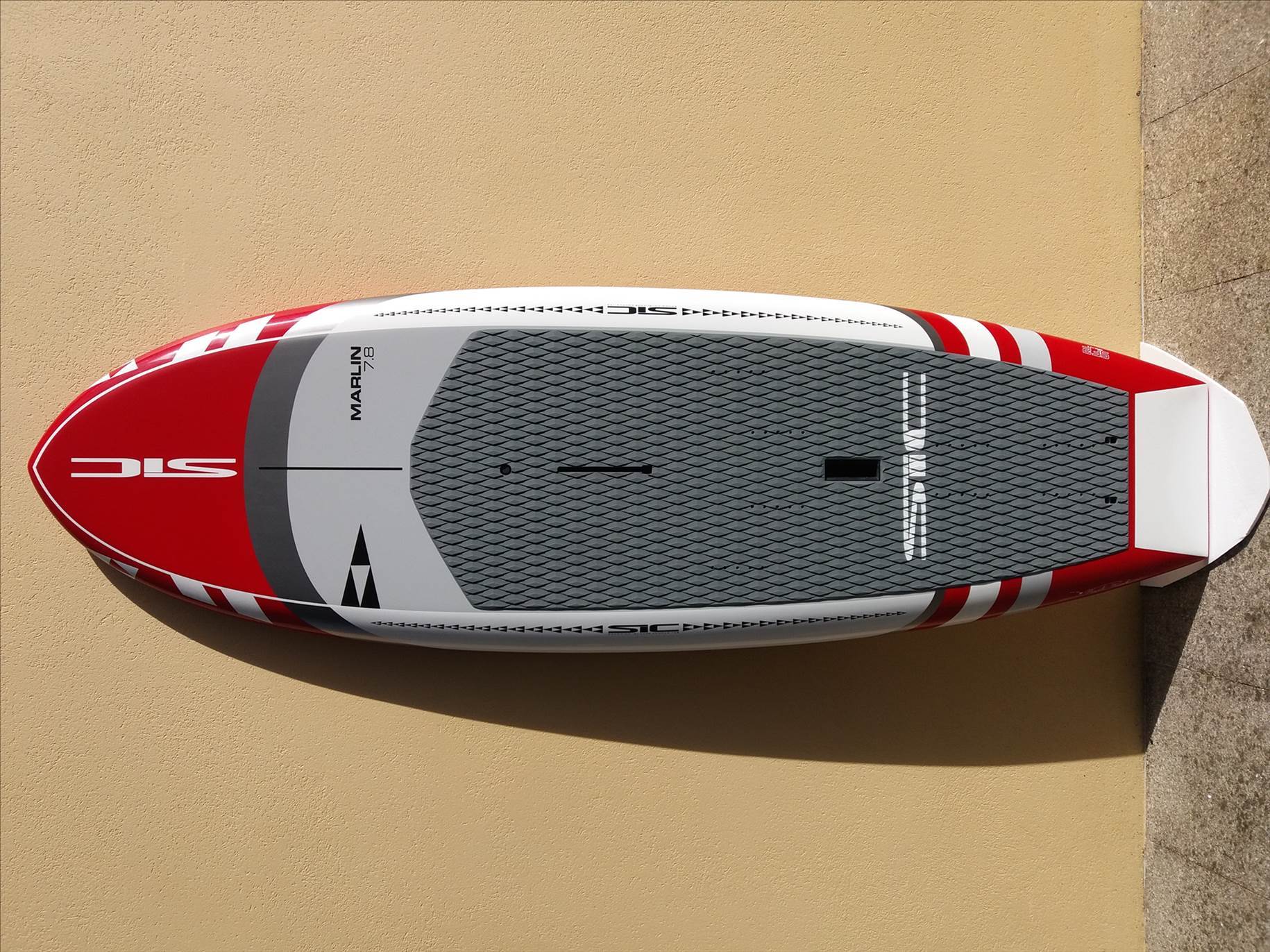 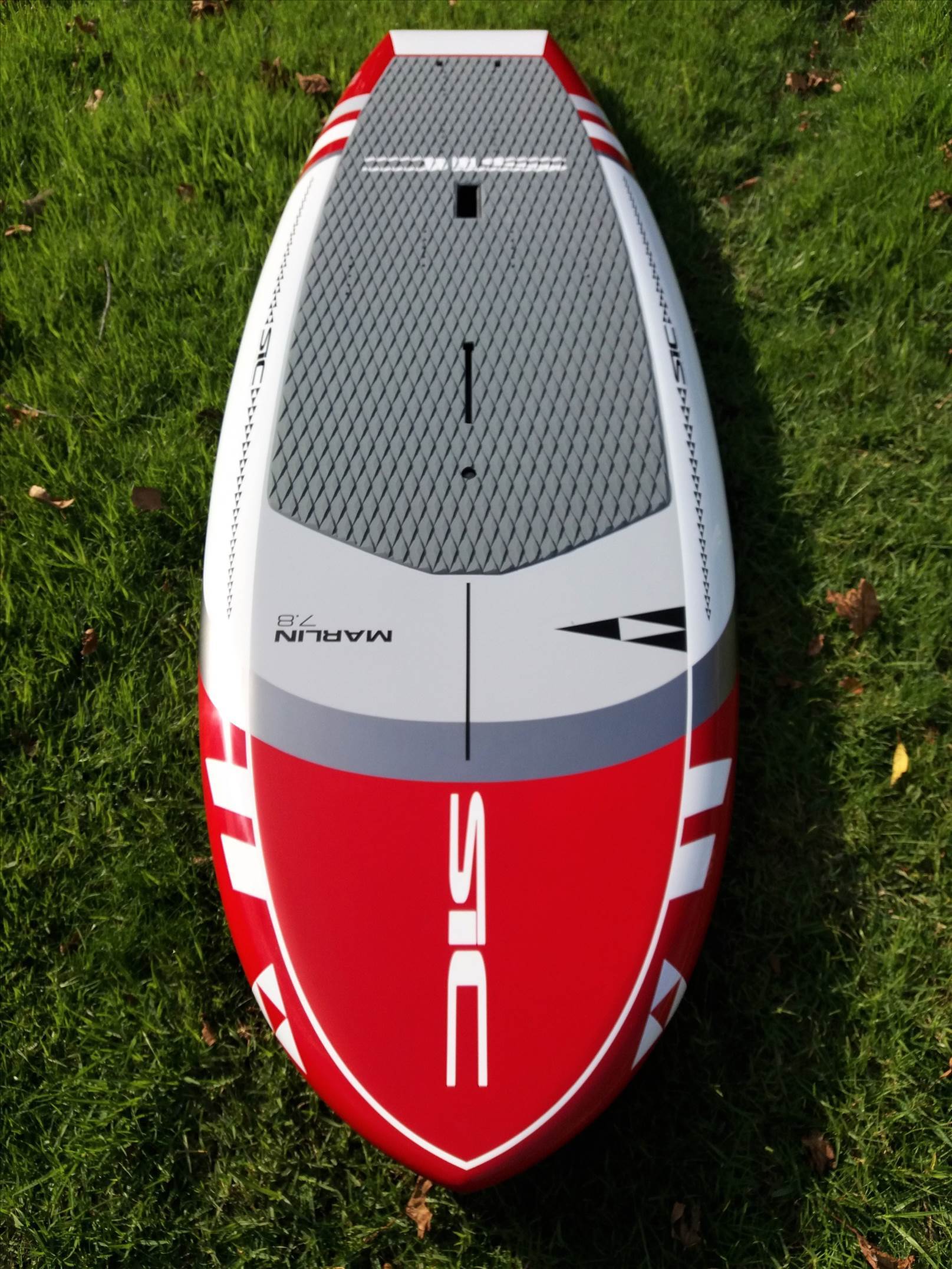 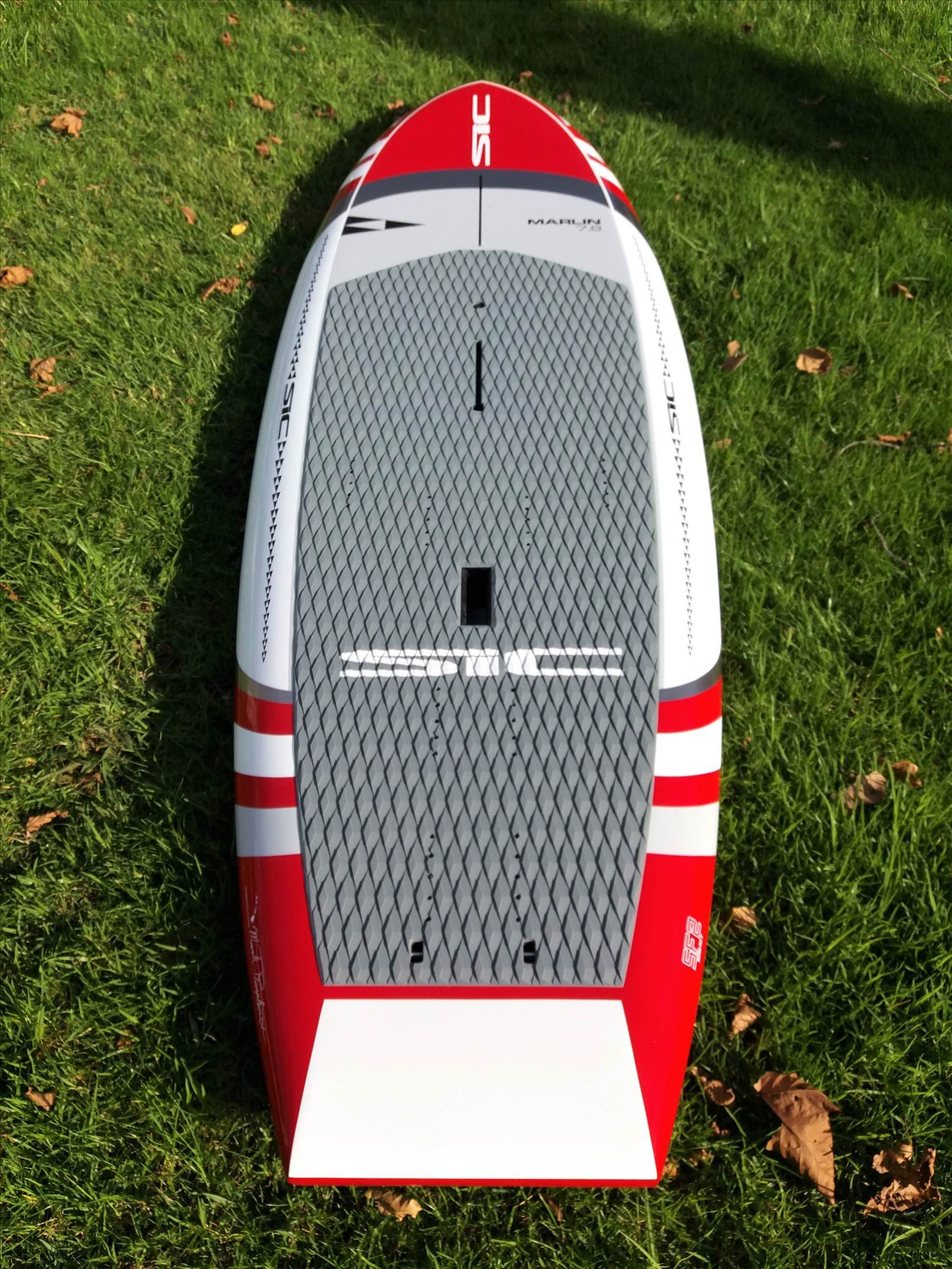 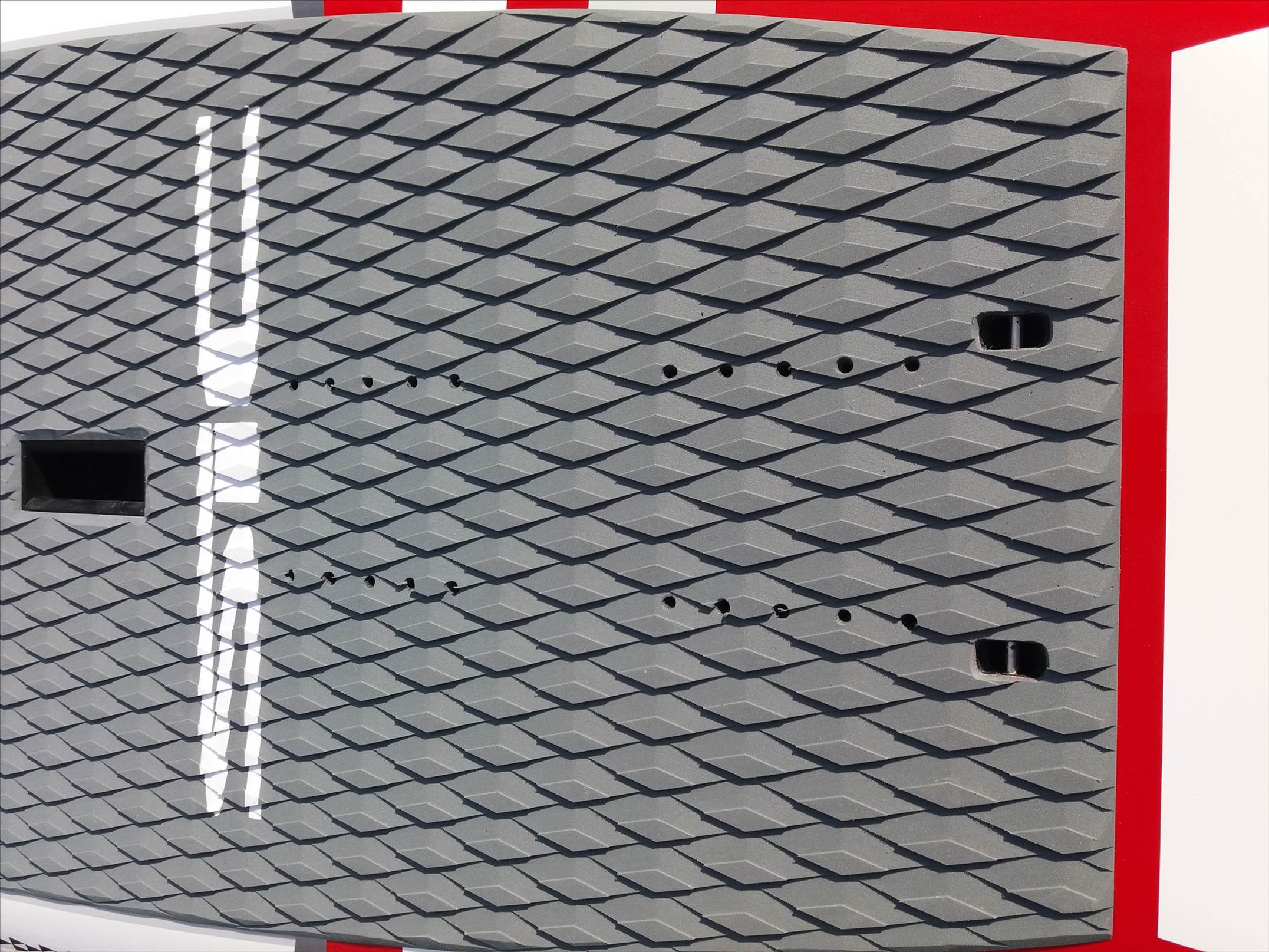 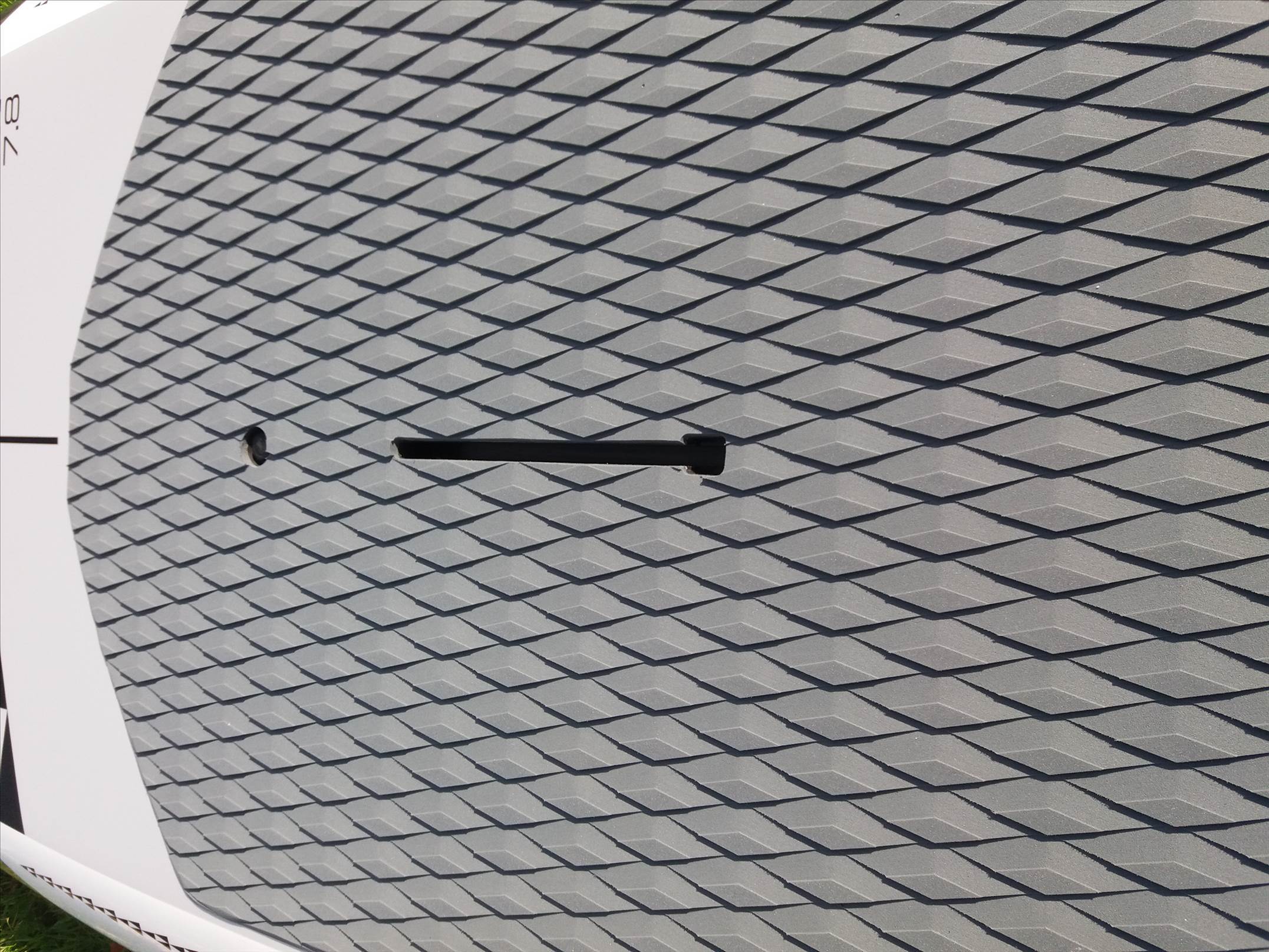 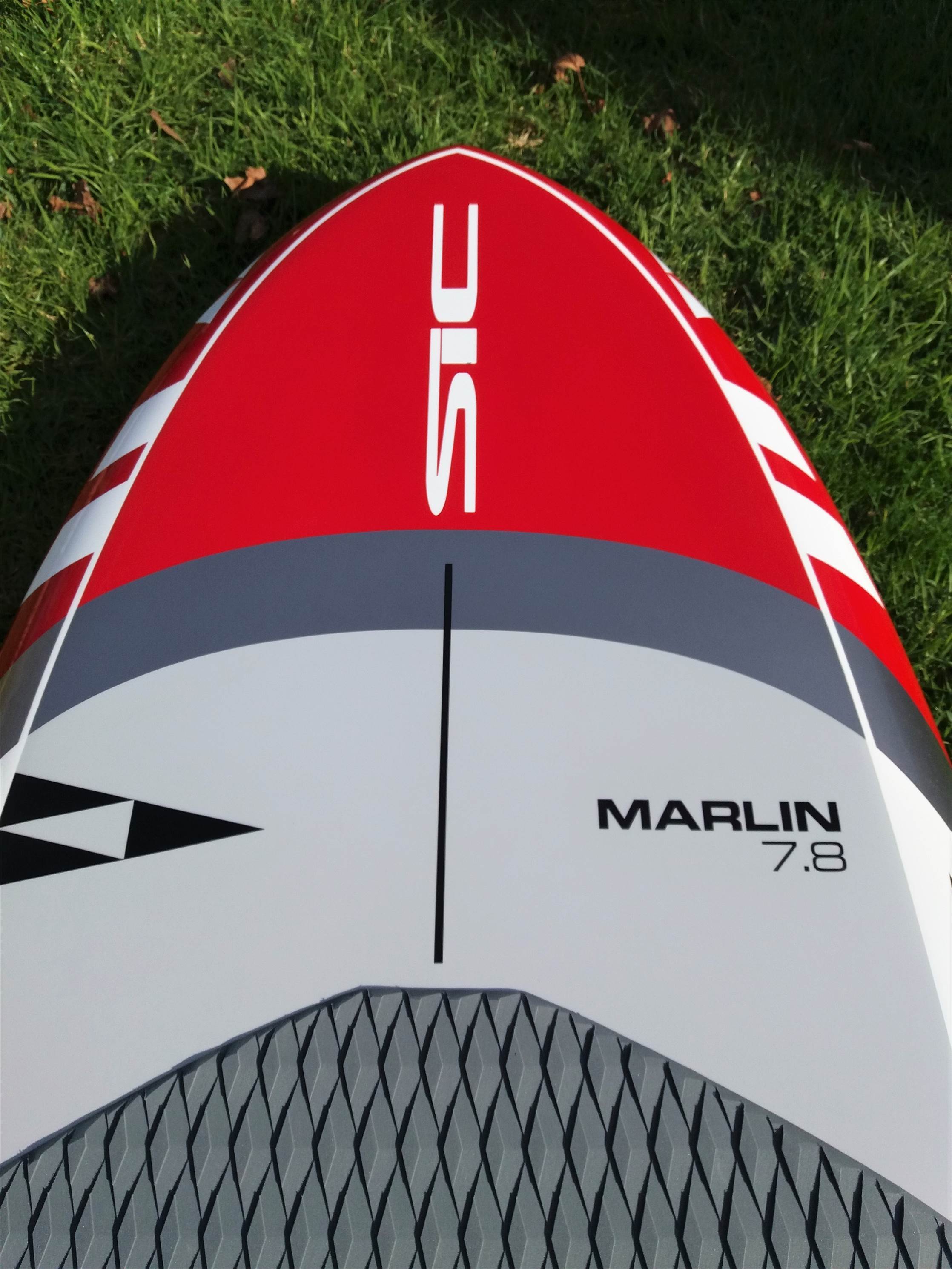 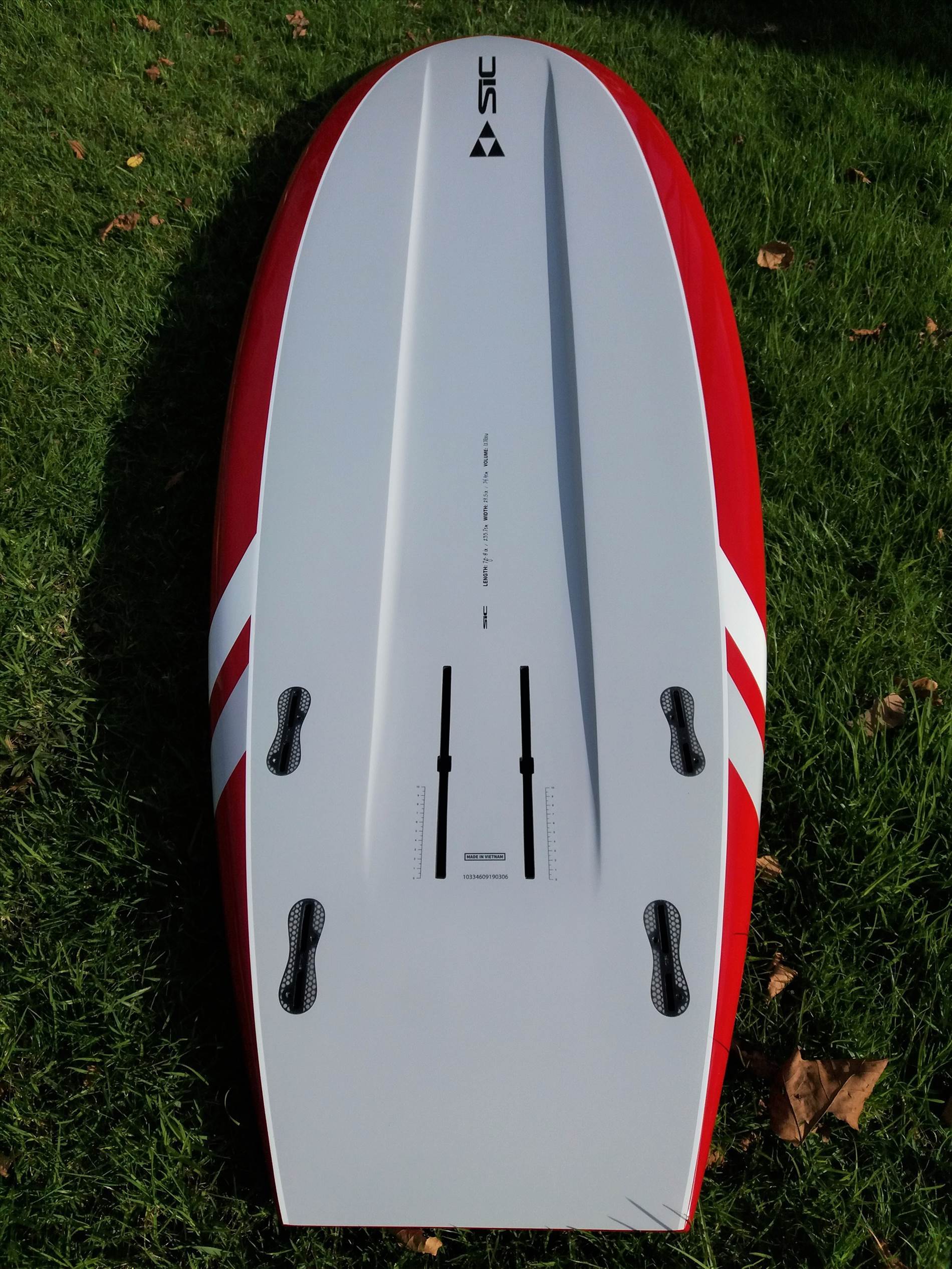 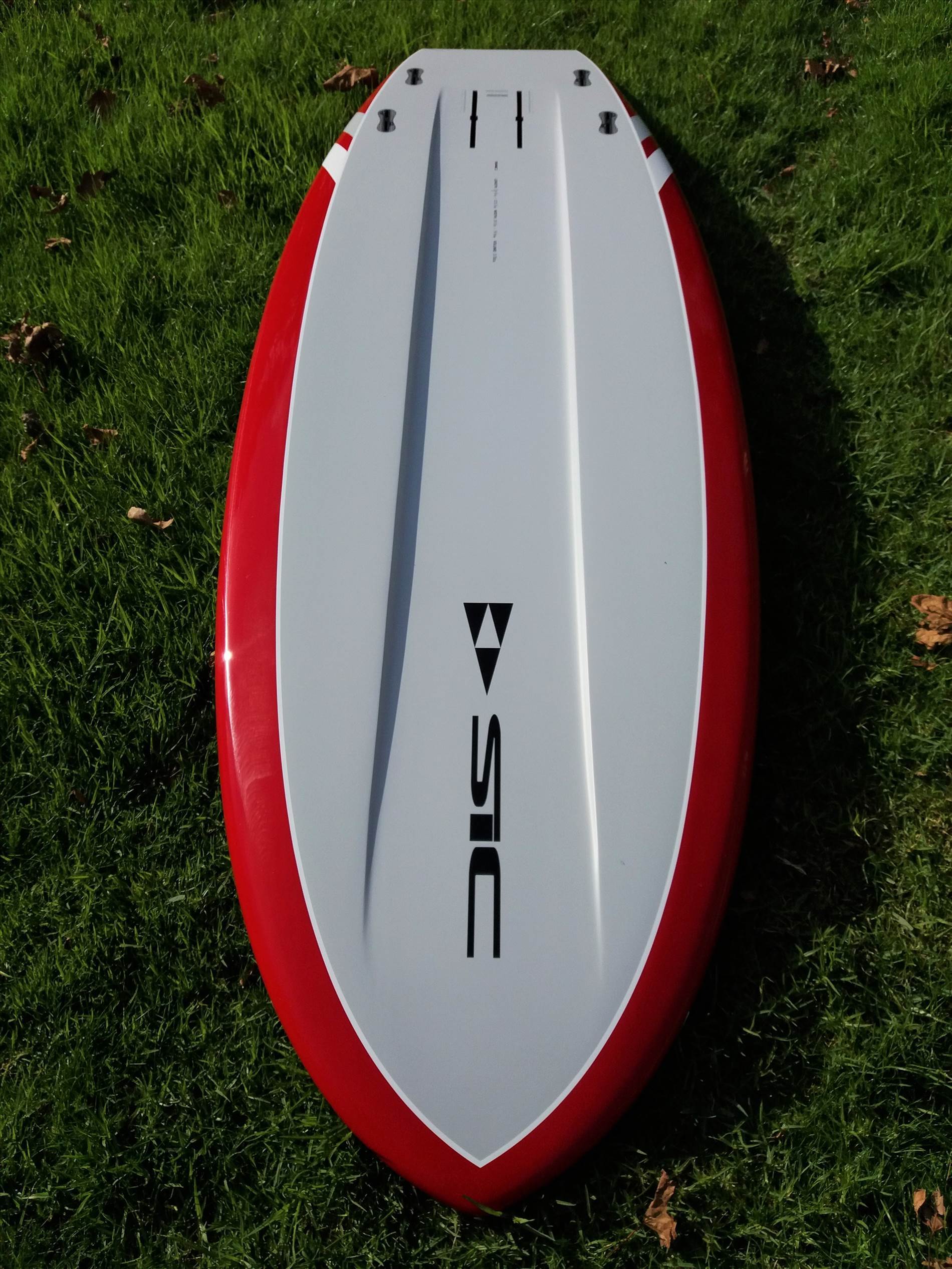 MLB007,
I travel a lot and have spent a chunk of the last 10 years paddling and windsurfing and now winging on inland lakes, so I sympathize with your search for one board that will give you multiple options. However, it is almost an impossible ask from one board. You are likely to have to compromise quite a bit in one area unless you are blessed with unusual conditions. The first thing to do before you buy a board is to get as accurate information as possible on the wind conditions on your lake(s). People who are already kiting or windsurfing there are a good source. There is also usually information online that will give you wind readings.

If the wind is truly light, say around 10mph dropping to 0 you are not going to have a great time windsurfing on a 7'6" crossover sup even if it has a rocker line that is designed for sailing. If you want to windsurf in that kind of light air I would recommend getting a 10' lower volume high performance style sup with a mast insert like the Fanatic Stylemaster. It is a great cruiser on a summer day and the low volume rails make it fun to gybe if the wind picks up a little. It also gives you a lower volume board that is fun to paddle in flat water and you can surf it on boat wakes or if you take a trip to the ocean. Unfortunately, it will not be a great board to sail if it blows hard: way too much tail rocker, no straps, etc. And you will have to get a second dedicated foil board to use with your wing.

Since you have already invested in a foil and a wing I would strongly consider just sticking to that as your wind sport and get a dedicated foil board. You mention the wind dying to nothing so I would get a slightly higher volume(at least 125ltrs.) to help with the inevitable slog or paddle in. Really light wind is hard to learn to wingfoil in, but wings seem to be getting better by the minute, so by next summer you will probably have 50 options that will give you at least the possibility of getting up on the foil in light air as a beginner. You could continue to paddle your isup.

If you live in that rare spot where the wind blows harder, say 15-25 a few days a week in the summer, you could probably get some use out of one of the 4in1 sups. They will all be a little draggy because I am pretty sure they all have surf sup tail rocker(I have only sailed one of the shorter hypernuts). You will need to be pretty lit up to make it work and it will take more strength than a board that releases easily onto a plane. If I you decide to go that route I would take a look at the 8' starboard hypernut. It has 133ltrs which is going to be a help especially when the wind dies. It also has inboard footstraps which will feel better when you are learning to sail in the straps. The extra length and volume would also make it a bit more fun to paddle in flat water and could easily be ridden behind a boat and will surf well if you get to the beach. I honestly don't know how a board that long will work with a wing. The longest board I have used with a wing is 6'6".

The Sic Marlin in the photos does look like a beautiful board. It is always hard to tell from photos, but I would guess from looking at the channel cut that is has surf tail rocker, so like most crossover boards it is probably going to Be more fun to sail in waves or with the foil. It would be useful to see one in person or talk to somebody who had sailed one. It also has a quad fin set up. I found on the hypernut that you need to run huge(5" or better) side fins to make it point better in light winds. I think any crossover would probably windsurf better on flat water if they had a single fin box in the tail. I don't know how that big single channel will affect things when you are not foiling. It might be great. I would e-mail the guys at SIC and ask them and also ask for a shot of the tail rocker with a straight edge on it.

Again, my first recommendation would be to get a dedicated foil board and stick with the wing. Second choice would be get a longboard to sail in light air and a dedicated foil board. If you have enough windy days and Really like a 4in1 idea I would try to get something around 130ltrs. With inboard straps and tail rocker that looks as close as possible to to the shots below. I am guessing that it will be very hard to find.The entry rocker is important as well, but this has gone on long enough.

I hope this was some help. And good luck. 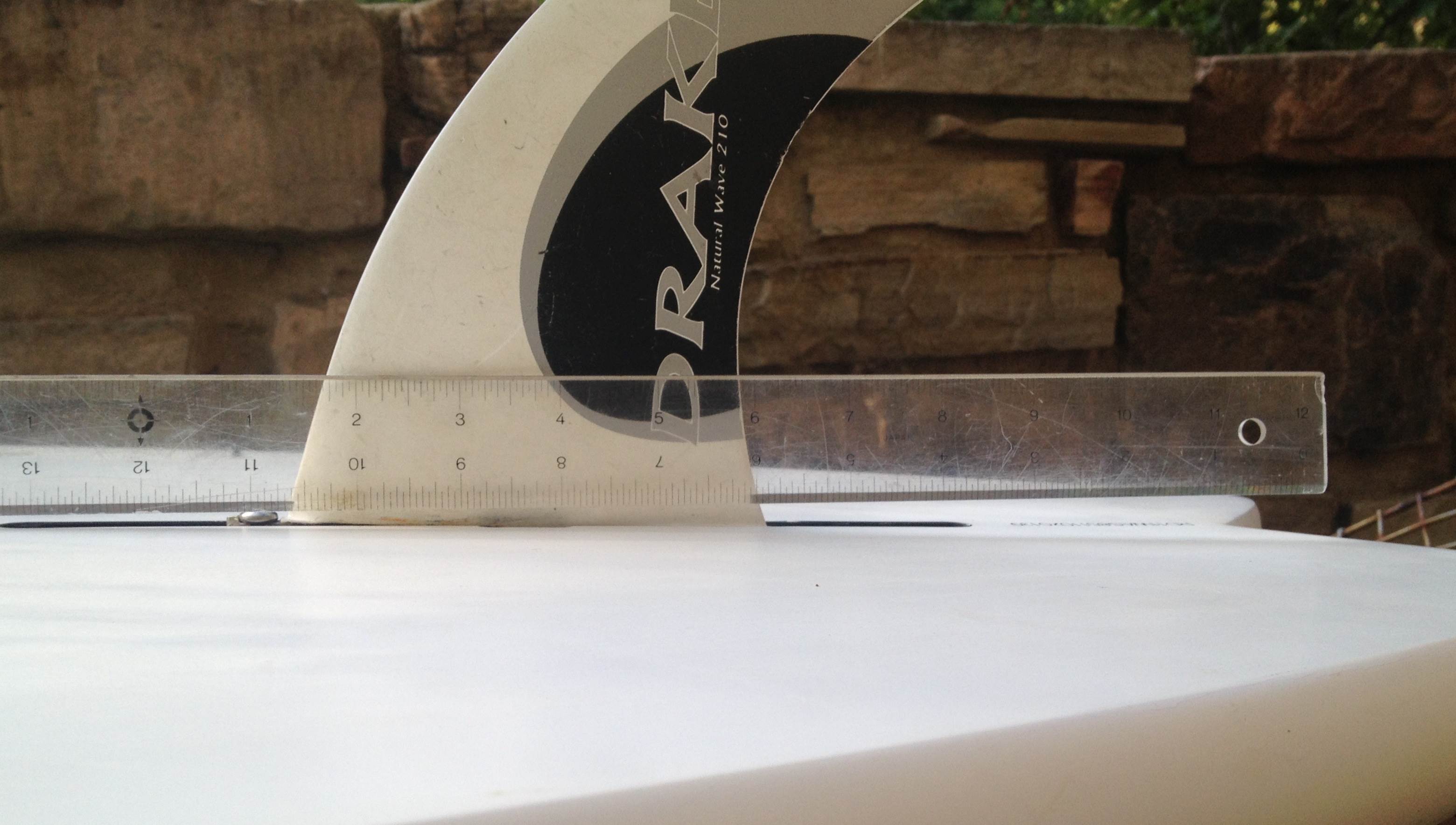 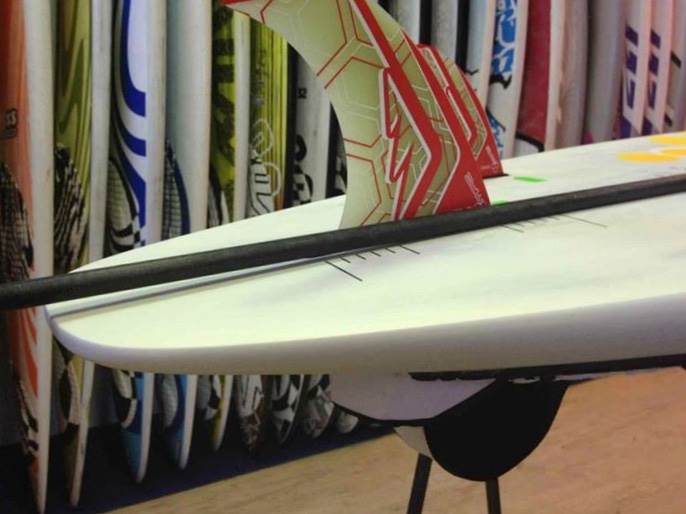 Thanks so much for the input.
I"m considering all of those possibilities, and it was very helpful.
Avg wind speed in July/Aug/Sept is 4-5mph. Max wind speed of 12mph those months. MAX speed for the year (avg) in April is 18.3mph, so no we aren't seeing 15-20 unless it's storming out or freezing in the spring and fall. Guessing I'll figure out wetsuits this year. ;)

The reservoir 20 minutes from my house is elevated about 40' and gets much higher sustained winds. I've gone several times where there was next to no wind in the city I live and then at the reservoir its blowing so hard it's impossible to paddle upwind. (on my thick Isup). Guys come from a couple of hours away to windsurf there. Having the board/s when and where i need them is half the decision. Maybe I get a shorter foil board to use at the lake on the weekends and then a longer windsurf board to leave at home for the reservoir. There's a "something LT" (board) that seems to be hugely popular and great for beginners that I've read about.

I bought a basic Kestrel wind gauge to start getting a handle on how hard it's REALLY blowing. (not nearly as hard as it seems unfortunately)

Those are Unbelievably low winds compared with where I live. We hardly have any day of the year when it isn't blowing 15 knots at some point, and most days will have at least 20 at some point. I can't imagine what it must be like to live in a place that has such little wind.

Select to expand quote
Area10 said..
Those are Unbelievably low winds compared with where I live. We hardly have any day of the year when it isn't blowing 15 knots at some point, and most days will have at least 20 at some point. I can't imagine what it must be like to live in a place that has such little wind.


Quite wonderful when you aren't doing wind sports. I'd honestly hate to live in the great windsurf areas the REST of the time, the wind gets old to me when it's blowing hard all the time.

Just got back from Hawaii and boy was that an eye opener.
Took my wind meter and we (continue) to not believe how hard wind FEELS and how slow it can be going. What we think of as a really windy day back home in Indiana is about 10mph.
What "feels" like "holy cow the windsurfers must be loving THIS" was like 15 mph.
And when it blew the hardest all week. The wind I couldn't imagine controlling a sail in, 20 mph. :) LOL
Mind boggling how hard it was blowing, the sand was stinging on the beach. You coulnd't carry much because the wind grabbed it and ripped it out of your hands. Car doors either blew shut with much force or wound't open against the wind.
God I would hate to live with that all the time!!!!!! LOL
I'd have bet $100 it was 30mph or more before the meter.

So the sad truth is the numbers don't add up to much multi purpose use ANY time. Much less all summer.Looks like I'm foiling by default because it won't be blowing hard enough to sail most of the time.
And probably behind the jet ski or pontoon (! LOL) most of the time.................. :(

So dedicated foil board it seems to be, but then where everyone is 'smaller, smaller, smallest" (once experienced) I will still be dealing with constant lulls even when the gusts are fast enough to get on the foil.(winging)
So most seem to recommend higher volume boards if you're going to be board in the water more than flying.

At one point I was about convinced to get an f-one Flyer 280 for that reason but then keep reading more and more small stuff so started thinking differently. Maybe right for the windy (enough) days but probably a really bad choice behind the jet ski (once past beginner) ???

So what would you get for behind a boat (mostly) and the occasional wing ding days where you're mostly riding the board?

Might not be the exact right one, but i've beaten myself up enough trying to educate myself.

Now the 4 month wait to use it.