question for aus230 or anyone elase

just been watching video of your ice flyer,where pilot is seated infront of sail, remember reading up on this from and old site (John lord diy buggies ) no longer on net where he suggested that there was less air flow disturbance from the pilot if seated in front of sail, Did speed on the wheeled version match the conventional seated minis. You say that tacking was difficult (in what way)
Is there any reason why we don't see this configuration on latest yachts,class rules or something,because if they are faster then it's something to think about.
Many years ago I did fit a small sail to a kite buggy at the rear,and tried it ,but sheeting system was a problem so didn't progress with it.
Just got me thinking.again of a new project

being stuck at home decided to build one of these,just for fun,and to avoid insanity. But looking at the various photos it has me a bit puzzled, the sails centre of effort appears to be directly over the rear axle,with a good section of the sail area behind it. The pilots weight and mast base are ,within the area of the ratio as suggested one third of length behind mast base and two thirds in front.(See AUS 230 old posting )Therefor centre of gravity is about at the same point+/-. So centre of effort is well behind centre of gravity. Which flows against the conventional opinion that the two should be matched as close as possible,or the other opinion that the c of e should match the centre of lateral resistance. So in this configuration surely the centre of resistance will also be nearer to the mast base and therefor well in front of the c of e. I can't see how you will not get serious weather helm,or the back end sliding downwind/breaking traction etc.If the base and seat are moved forwards to allow a more to the front position of the c of e.The ratio of one third to 2 thirds goes more to half and half and puts the Centre of gravity well forward.

So to aus230 since you have sailed one, or anyone else, Is the configuration as in all of the photos ok. If it is it throws out all the convention as to normally configured yachts. 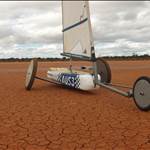 before you even start building, be warned it performed really awful. my kids would sail or ride out on their bikes or a mini to push it or just sail around it. it tacked badly or not at all. weight on front wheel was huge. i suspect with a lot of thinking and complete redesigning you could build a good front seater, but this aint it.. i welcome disagreement by others . I was merely there at the time to see it sail. I've given you my observations AND an opinion

yes its the front wheel weight that concerns me,done a quick mock up ,just clamped together and weight on each wheel comes in at 10k each,with me sat on the centre goes up to 40k each,my mini with full rig and me sat on It front wheel weight 4k,can't see how,unless you use big rigs,which I have(up to 9 meter and 100%carbon masts to go with them) they can be anywhere near as fast as a well sorted mini or class 5.mind they do look as thou they perform ok on vidios I've seen. Did you use one land yacht and what sail did you use.

"question for aus230 or anyone elase" started by kennatt