My body is always ready to get destroyed!

I really should have said that my body is always ready to let me down but mechanical and chemical engineering takes care of that! 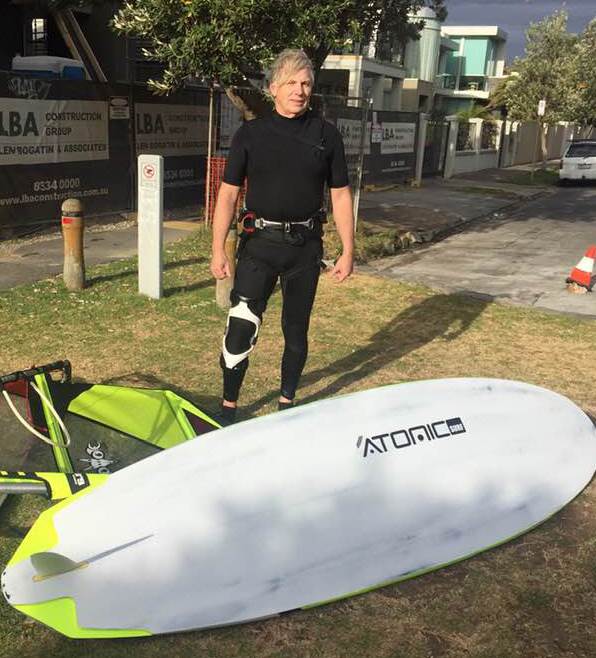 Well its maiden voyage today. Most importantly is it didn't sink.
Seriously it was a very successful first sail and I am really happy. The most noteworthy thing is that it is just so easy to ride and really composed in the messy chop. Today there was a bit of everything, a gusty northerly that had me at times overpowered with a 5.7 and other times I was dogging. Through the chop the board is quite smooth but due to what feels like a bullet proof construction it is still lively enough, I think the balance is perfect. If I were feeling like a breather and relaxed it just cruised along with complete ease and when i put the hammer down I could tell it wanted to get up on the tail and fly but unfortunately I think I had it way over-finned and I could feel the fins drag holding back, Cranked up wind though. It turned on rails regardless of how much fin i had in at was just a crap load of fun.
So what about the Inverted V? Well I think it works great, no negative aspect that I could feel, did what it was meant to do. Is it better than standard concave? Well no worse for sure but I would be lying if I said it was noticeably better, same but different I think is the answer.
Peter got the rail shape spot on, enough tuck in the front that it never felt like grabbing but the crisper rails in the tail gripped fantastically through the gybe and it was really easy to drive up wind.
All in all I am extremely happy, its an excellent board just need to get the fins tuned for it.

Thank you Peter at OES for doing such a magnificent job. Honestly more of you should look at the what the custom builders are offering, it would be awesome to see more Aussie or Kiwi built boards on the water, support these guys or they may not be there any more.

More on how it goes next time Huey co-operates. Happy days

Here are some more happy snaps of the board to explain it a bit more. It is nothing radical, just a refined and balanced shape for a really predictable and fun ride. The only controversy would be the inverted V but really it is just a variation on concave. 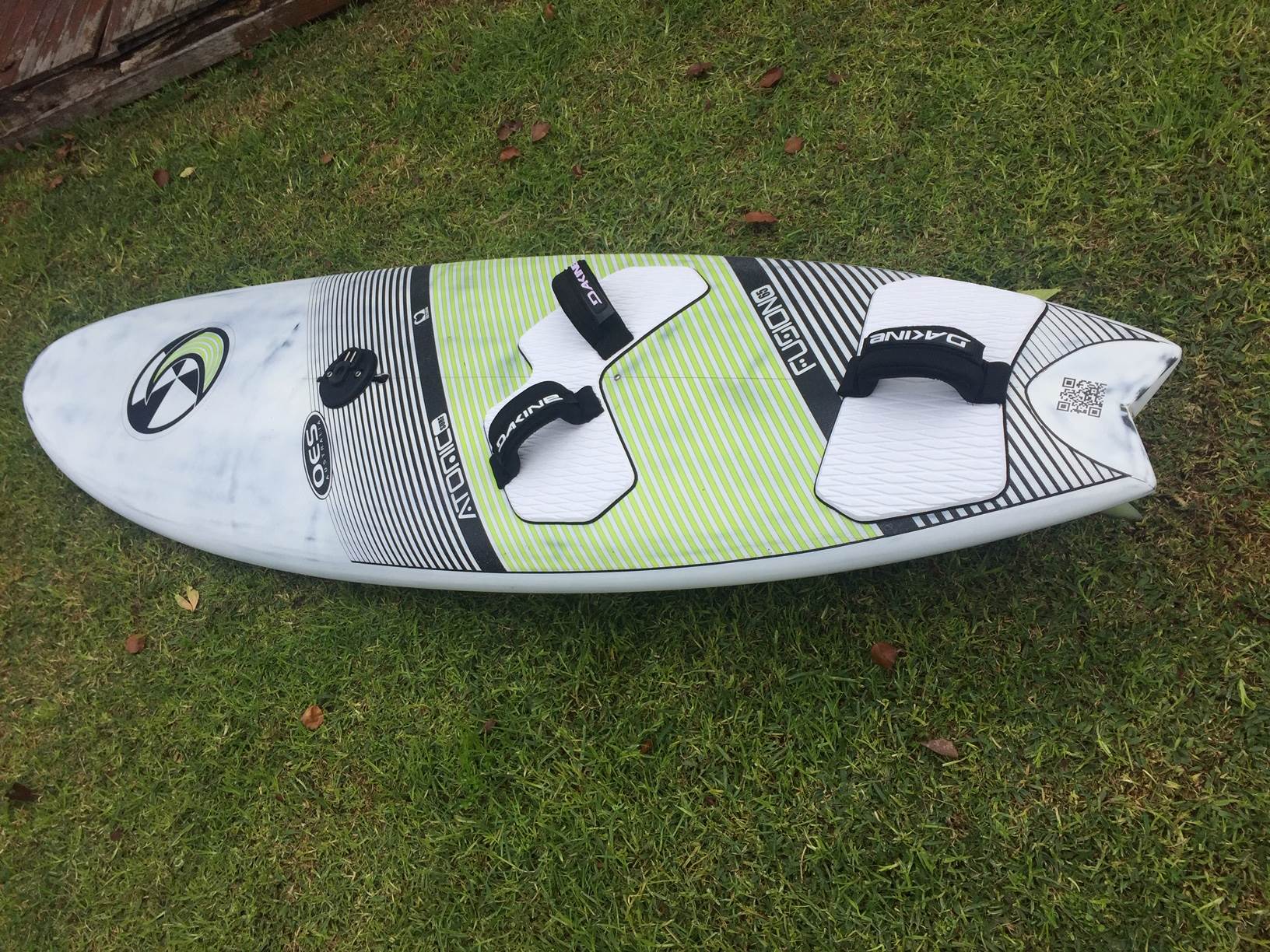 So is 230 long, 65 wide and a shade over 105 liters. A little parallel in the midsection then kicking at 300 off into a swallow tail for reduced wetted surface while giving the maximum rail length for grip. It is built in the OES CKC, Carbon Kelvlar Corecell construction which is bullet proof and it came in at 7.2kgs. Peter said his alternative layup, CIC, Carbon Innegra Corcell would be 300-400 grams lighter as it has more Carbon and less glass. I chose this for the slightly softer ride. Both constructions have been proven to be incredibly durable over many, many years. Duel density pads and DAKINE straps. 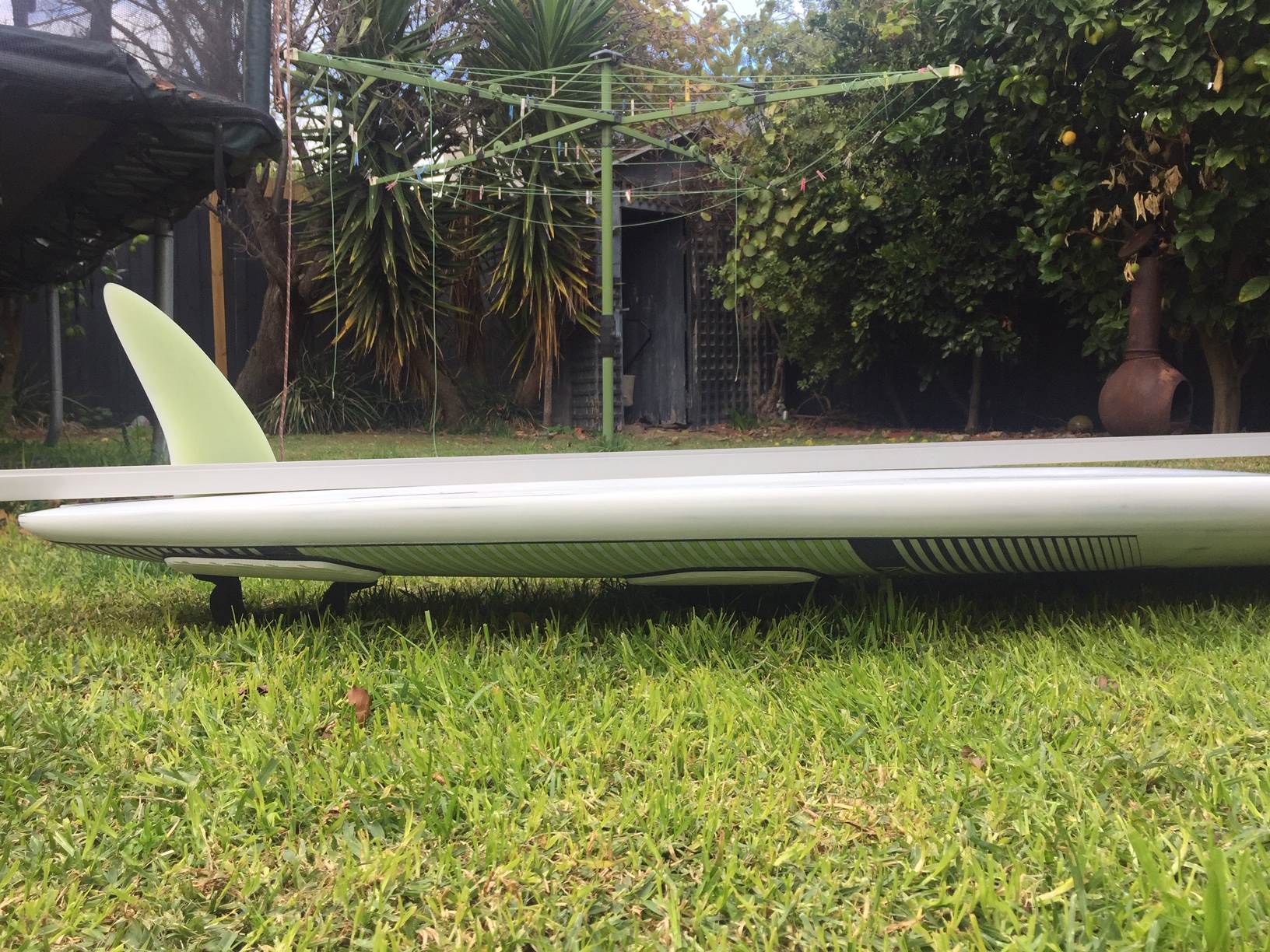 I designed the rocker to be as versatile as possible. It is flattish between the straps for early planing and speed and it has 5mm of tail rocker for great gybe initiation and a looser, free ride. The nose rocker is 200 mm , the transition into the nose is a very pure parabolic curve running forward from the flat section. 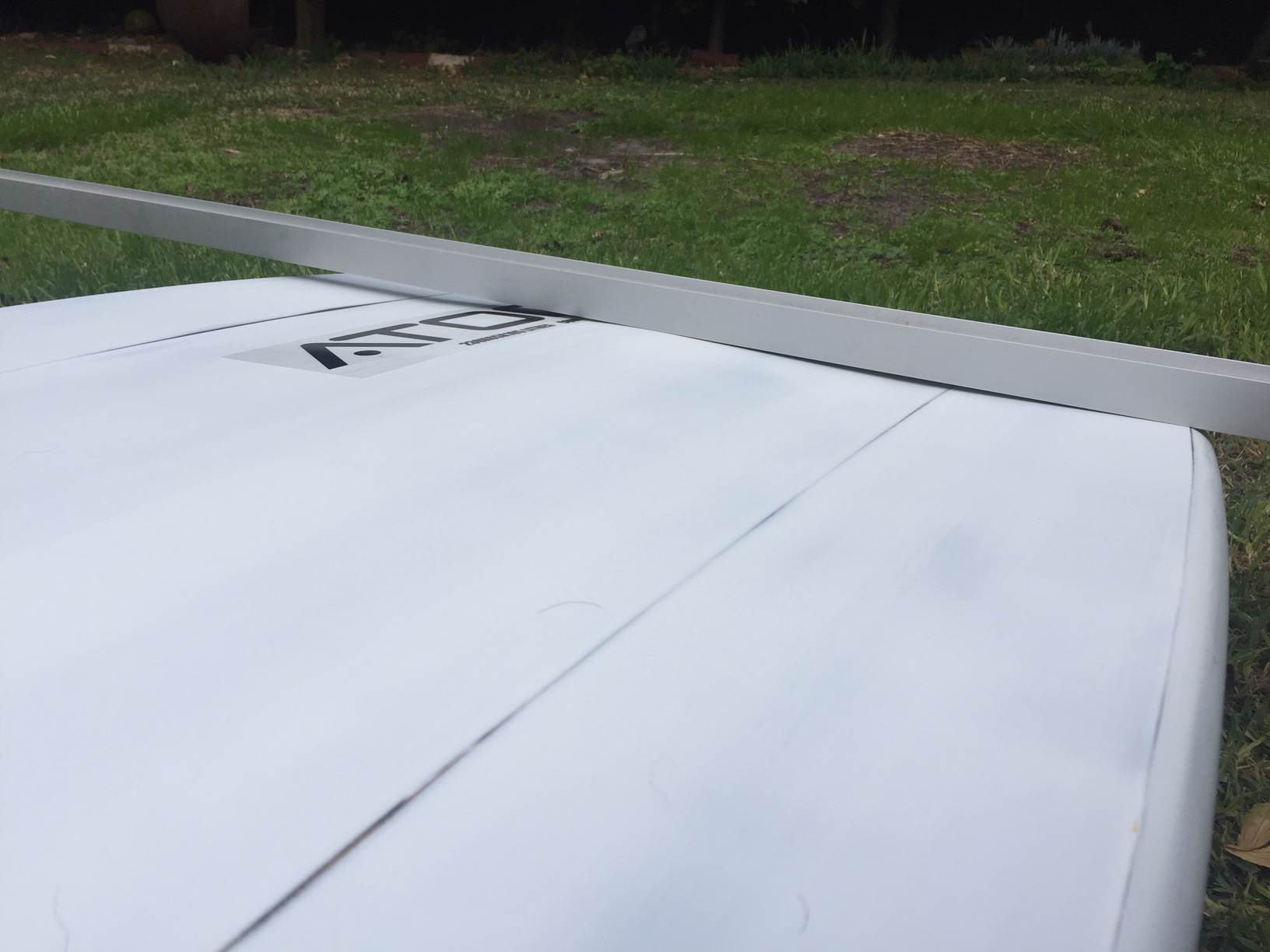 The board has generous V right through with the moderate inverted V starting quite early. 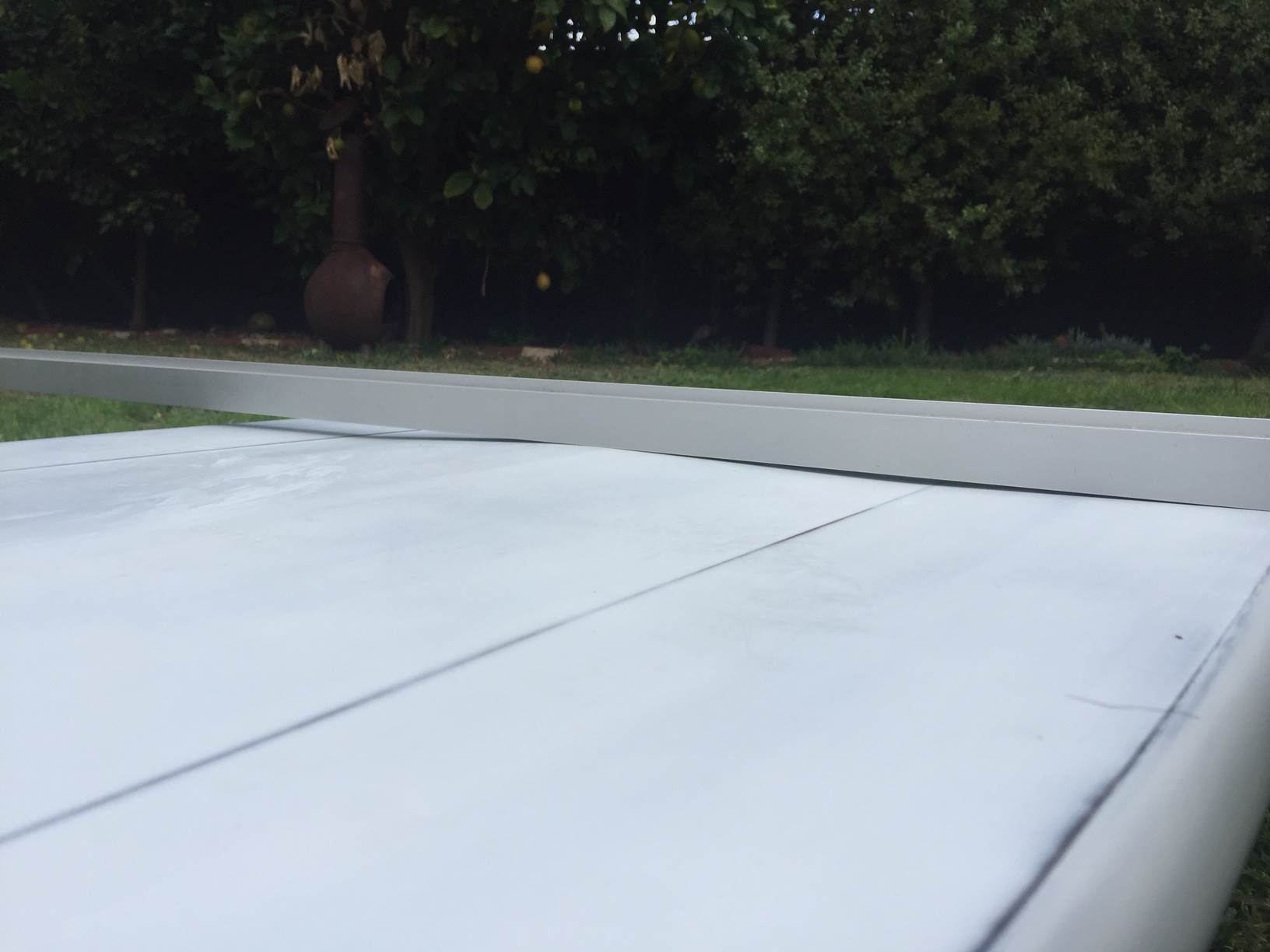 At he mast track the inverted V is at its deepest. 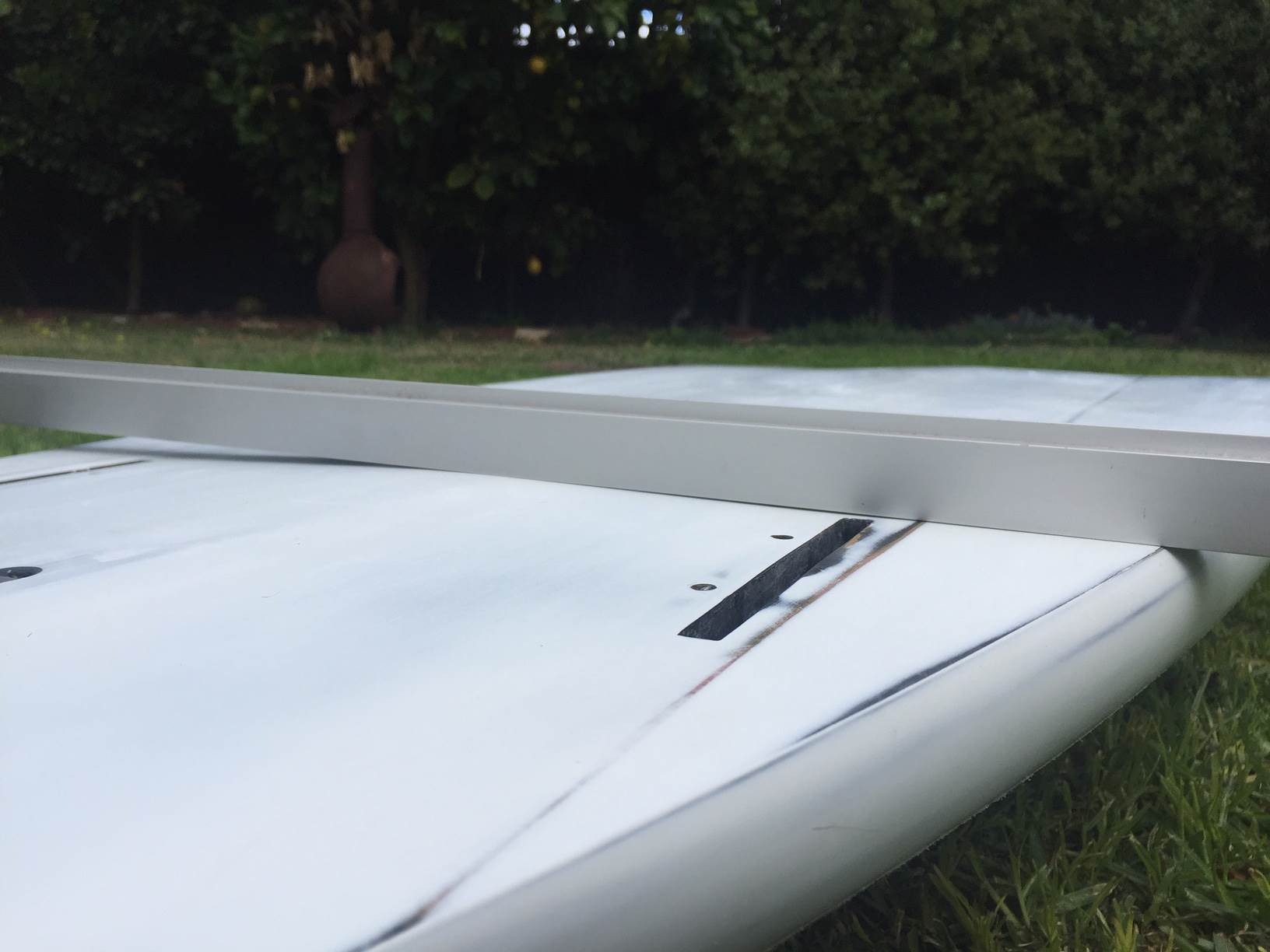 In the tail there is just a hint of the inverted V left and the actual V sprirals, so increases into the tail . This increases the rocker at the rail to improve the carving. 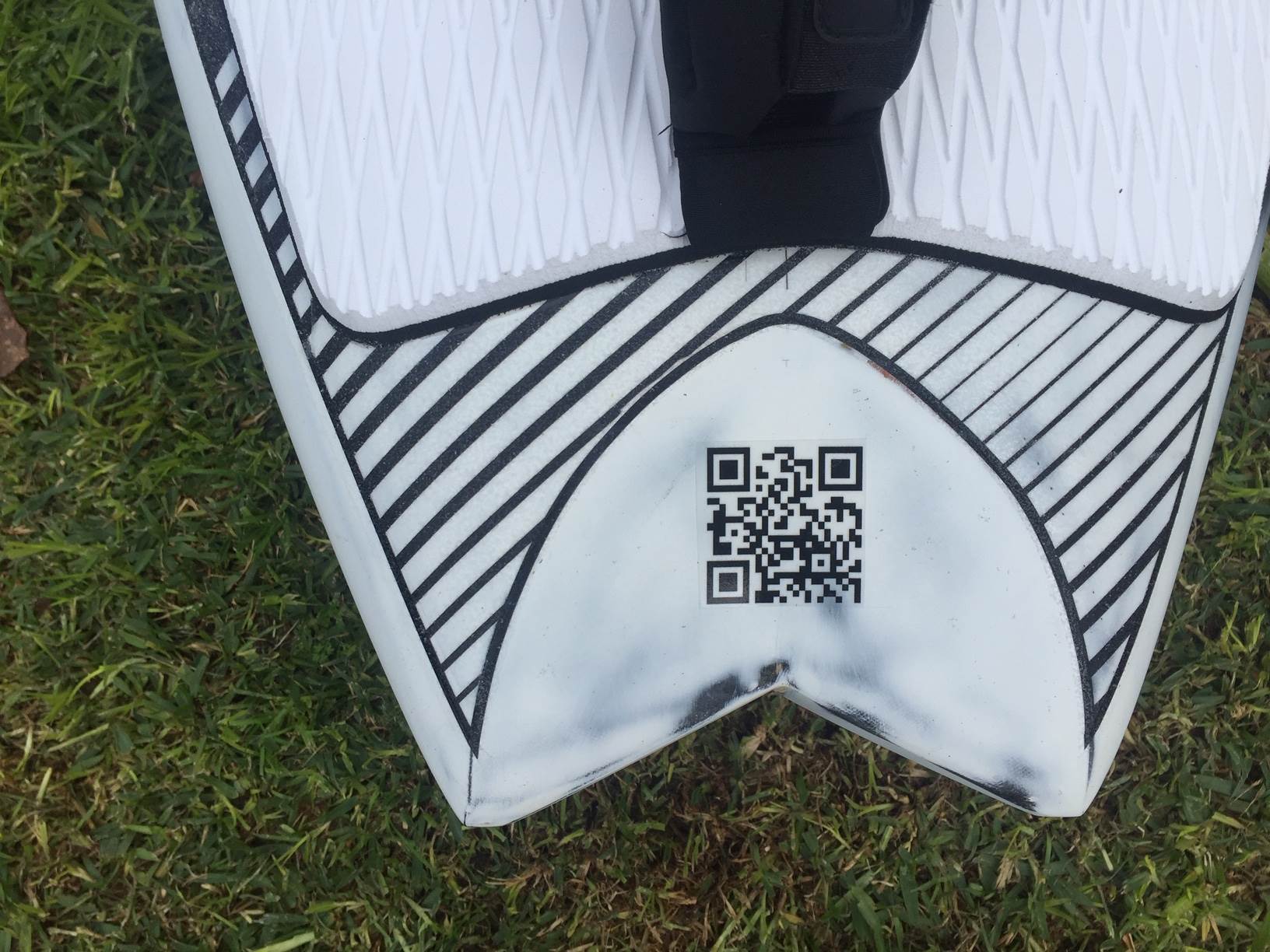 A fairly deep swallow tail to remove some wetted surface behind the fin while maintaining a full length rail for grip in the turns. 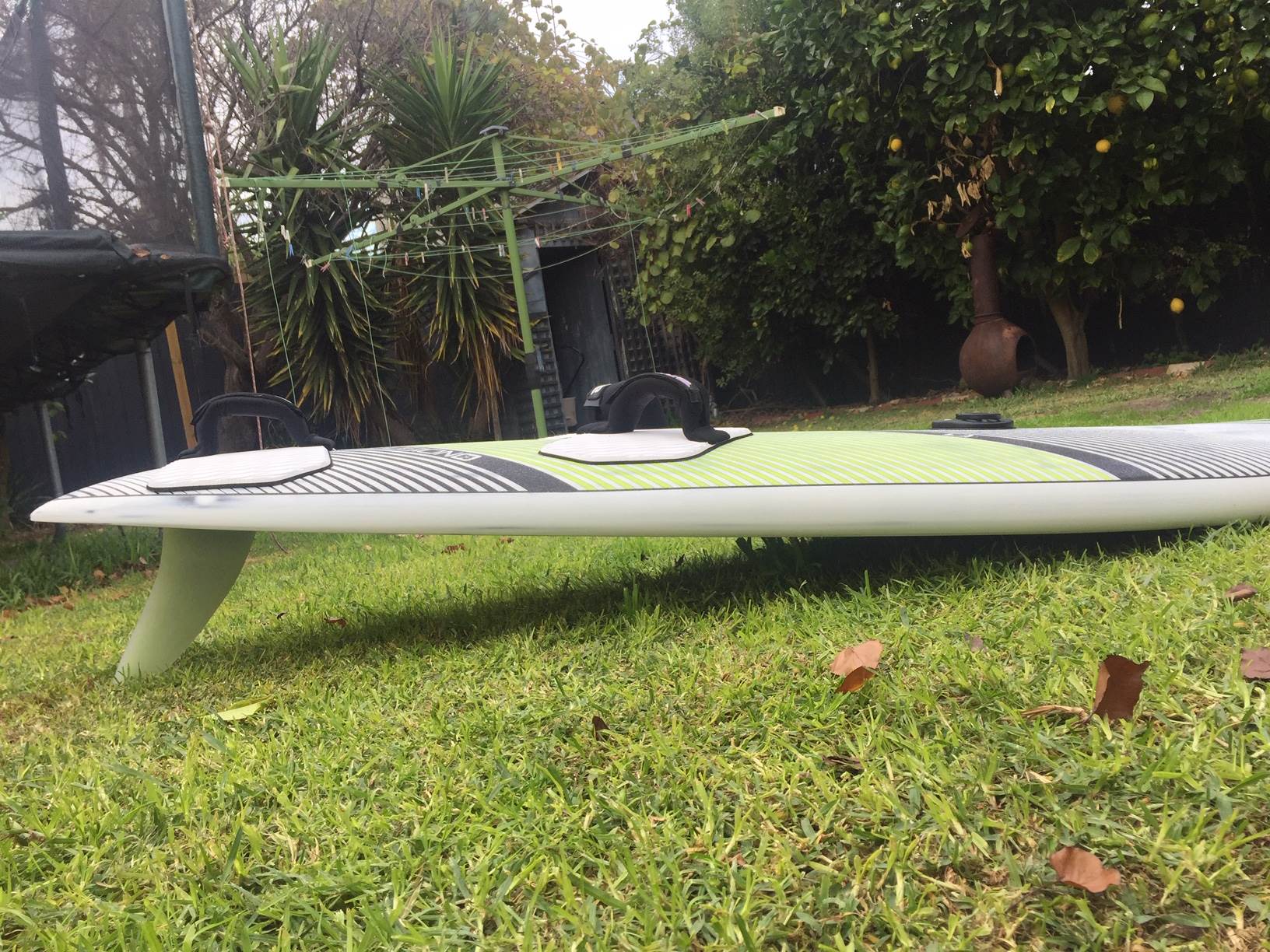 A nicely balanced volume, plenty under the front straps for stability when off the plane with volume removed forward for a lower swing weight and in the tail to improve the carve.

So there it is. Going forward I will think about the double inverted. Peter said it was trickier than standard double concave to build and honestly I am fence sitting about it anyway.....it works great but feel it is most likely no better, just different. I had to try it though.

So now the shameless plug and sermon.......... It is time for you to be thinking about your next seasons quiver. What I would ask of you is to put a custom board on your shopping list, yes great if it one of my designs but also look at what our awesome craftsmen both here and over in NZ are offering. My little brand / project is not about money as frankly there is none in it, it is about my passion for designing boards and my passion for our great sport.But its more than that, it is also about supporting these master craftsmen who share that passion and are here to offer up something other than the mainstream and to give you the experience of being part of the design process . They will build you your own little piece of magic. Of coarse this is not for everybody but for those of you who like some individualism then definitely consider it. We need to be supporting these guys.

Ok well I had my second session on it today. Pretty brutal conditions in a very gusty Northerly at Green Point. 25 to 35 knots with bigger bullets (peak gust at Fawkner Beacon was 51knots) Despite being well over cooked on a 4.7 and wrestling a lot of the time the board was super. Yes too big for the conditions but it behaved superbly. It is very smooth through the steep chop and really composed. I put some much smaller and thinner side fins in it today, too thin really but the draggy feeling had completely gone and it was really fast when I wanted it to be. Yet at the same time it is loose and carvy. It just did everything I asked of it despite it being outside its wind range a lot of the time.
I reckon I am getting pretty good and this board design thing

I am more than happy...this a fantastic all rounder and I am going to have bucket loads of fun on this thing...fun times ahead. 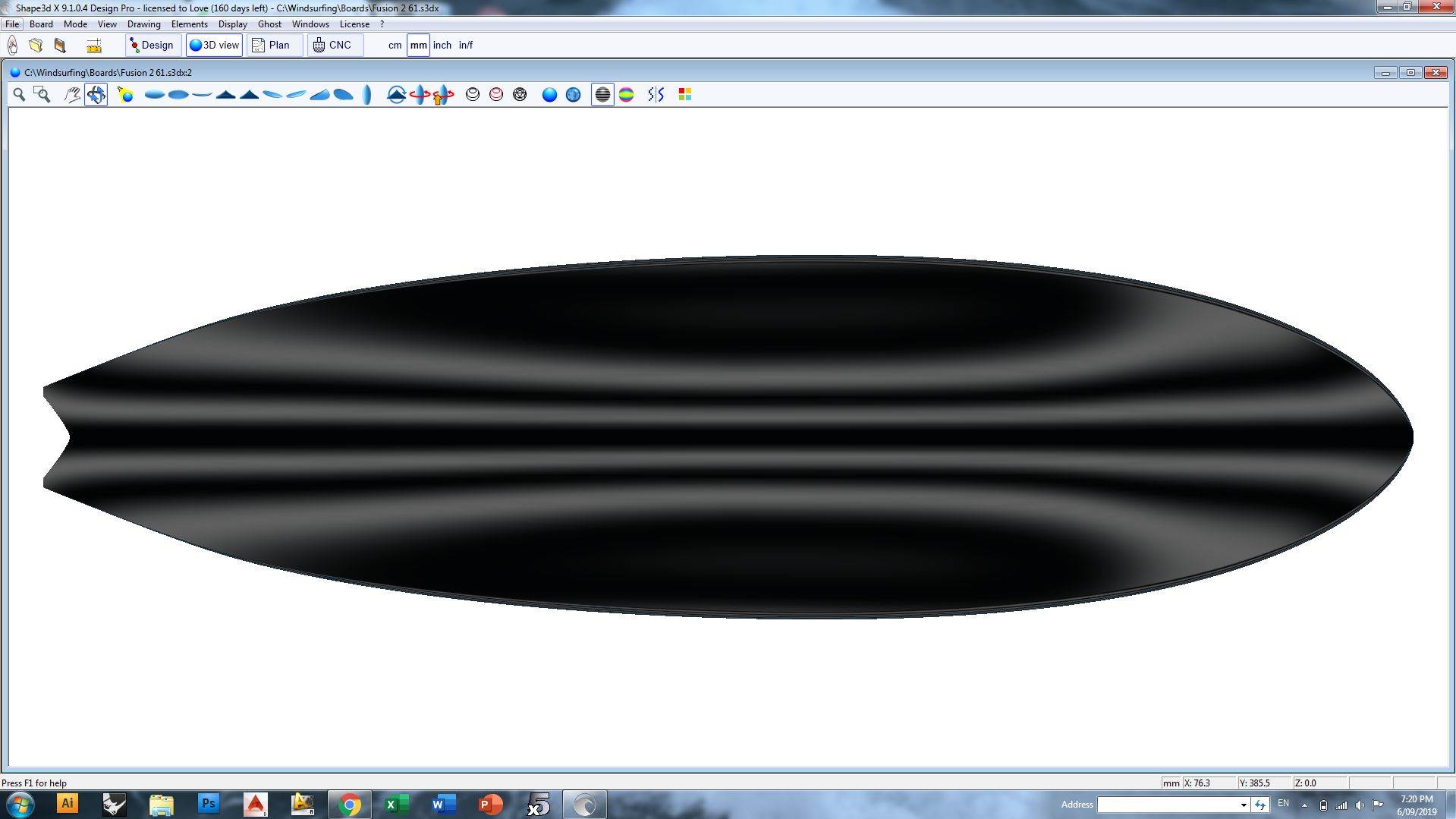 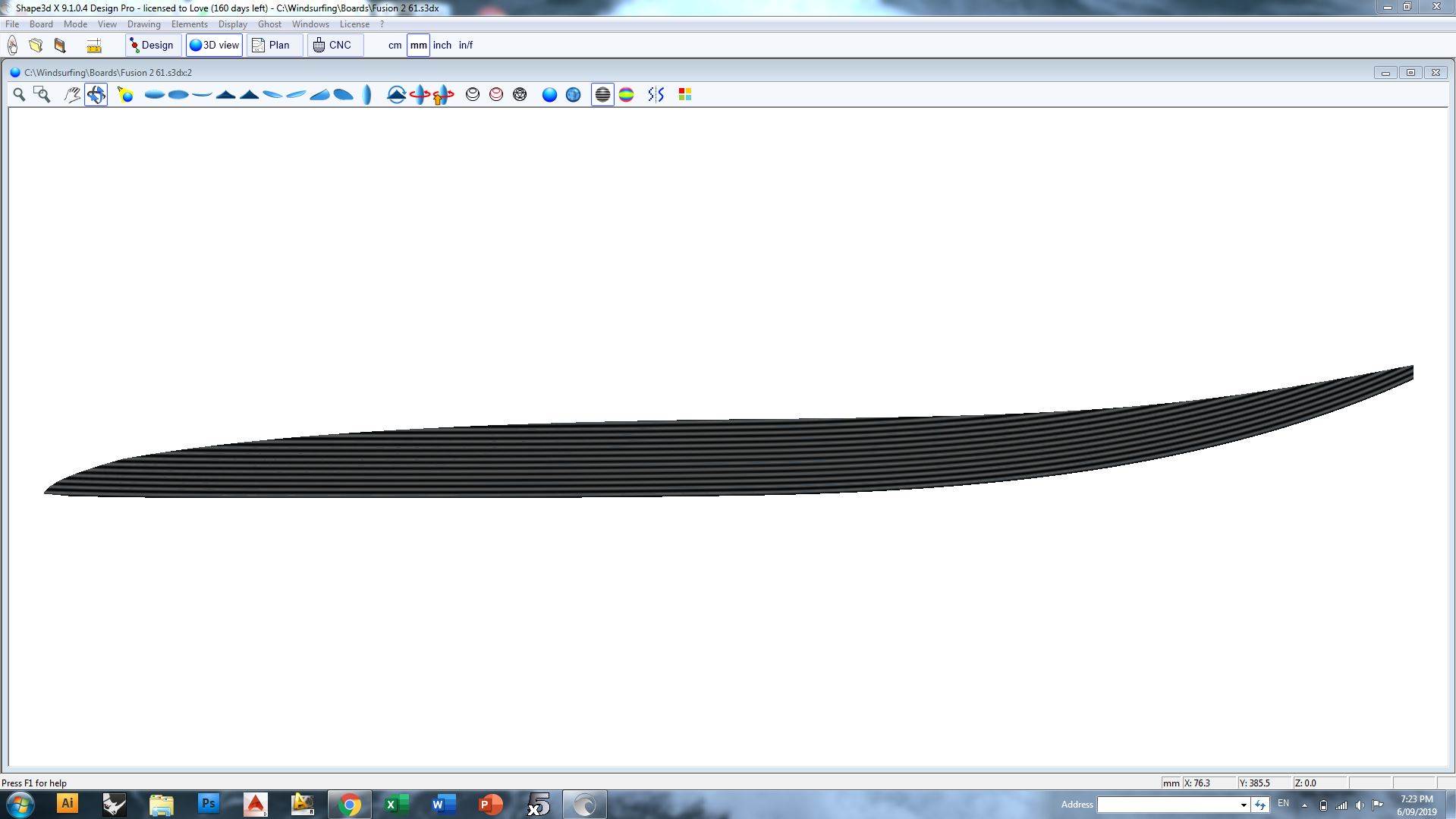 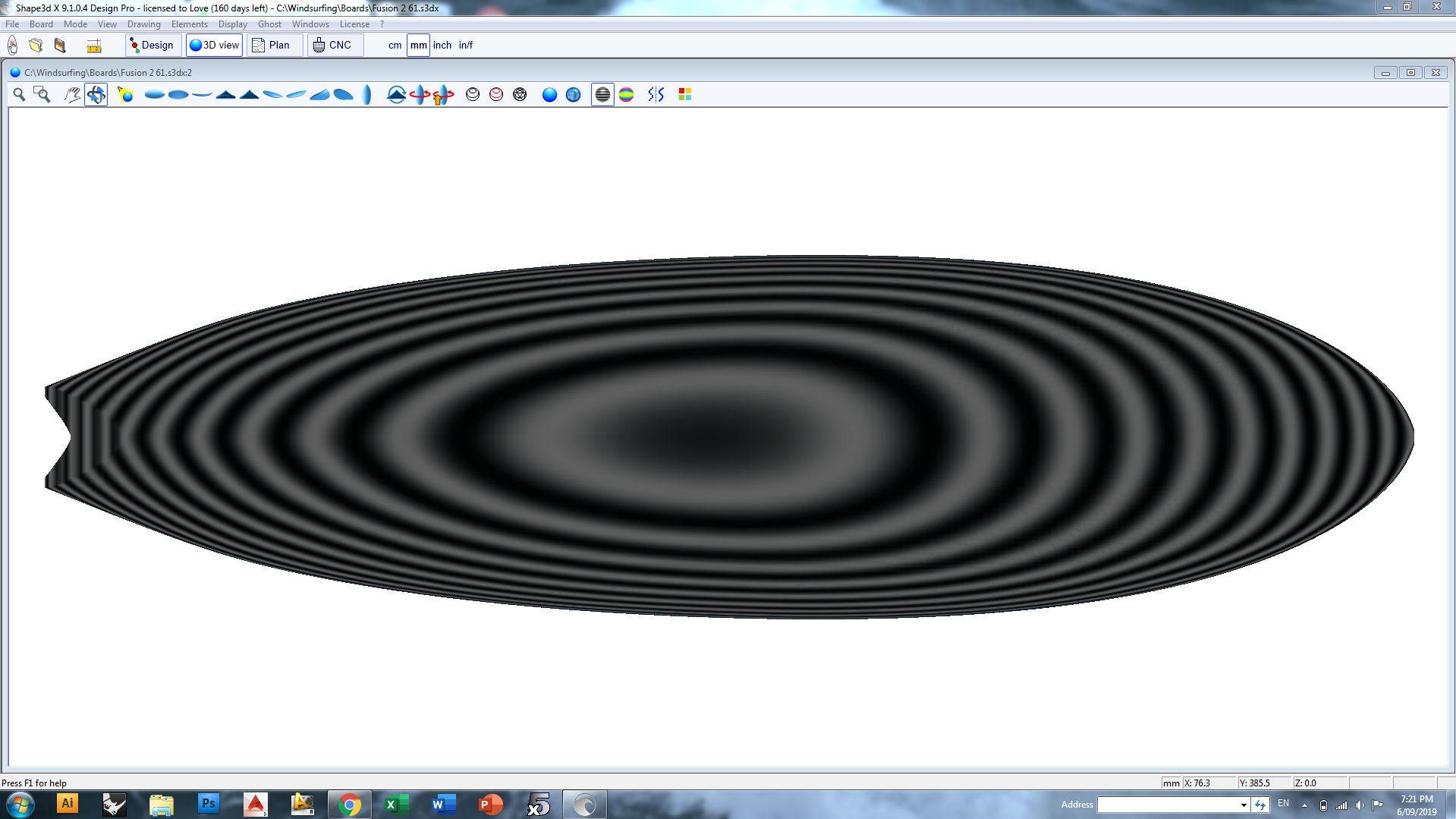 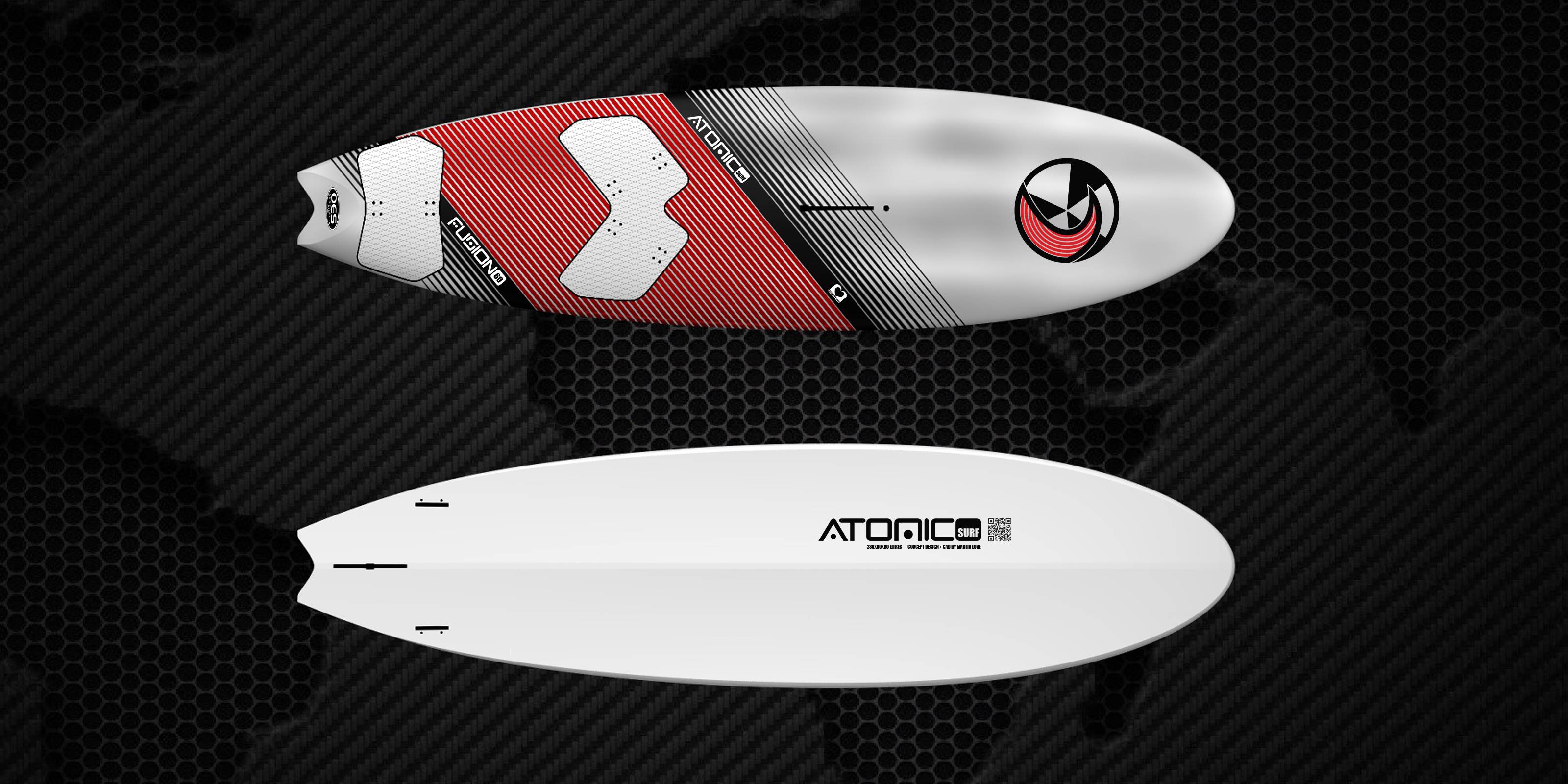 The 61 is well under way. Again our local custom builders excelling themselves, Pete at OES doing a stellar job. 230X61.5X97 litres. V double concave. Carbon deck S glass bottom will be the layup. Nice squishy pads with 5mm EVA tread and 2 layers of 3mm lower density under, my knees feel great already!!! . It,s going to be an awesome Summer!!! 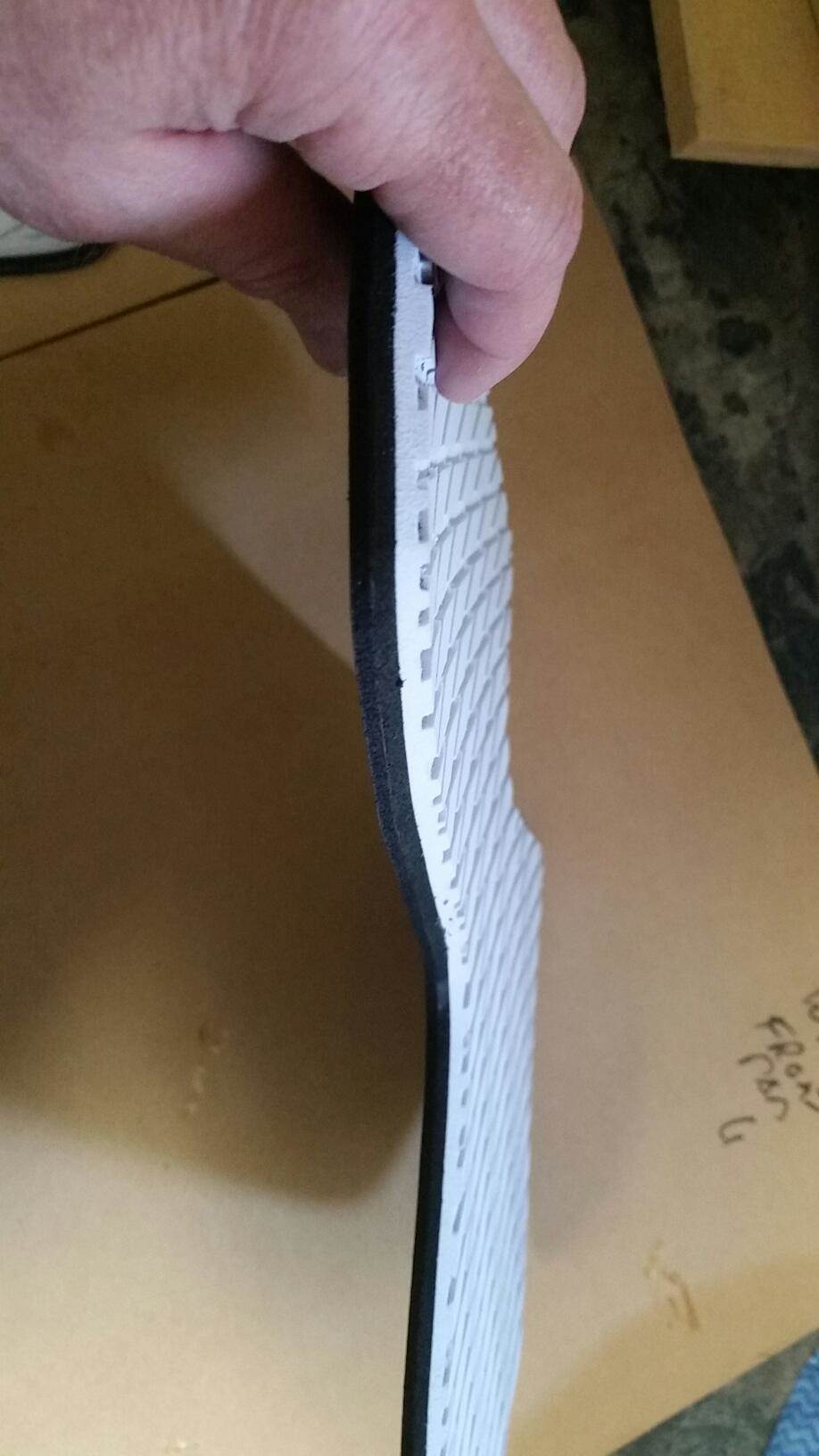 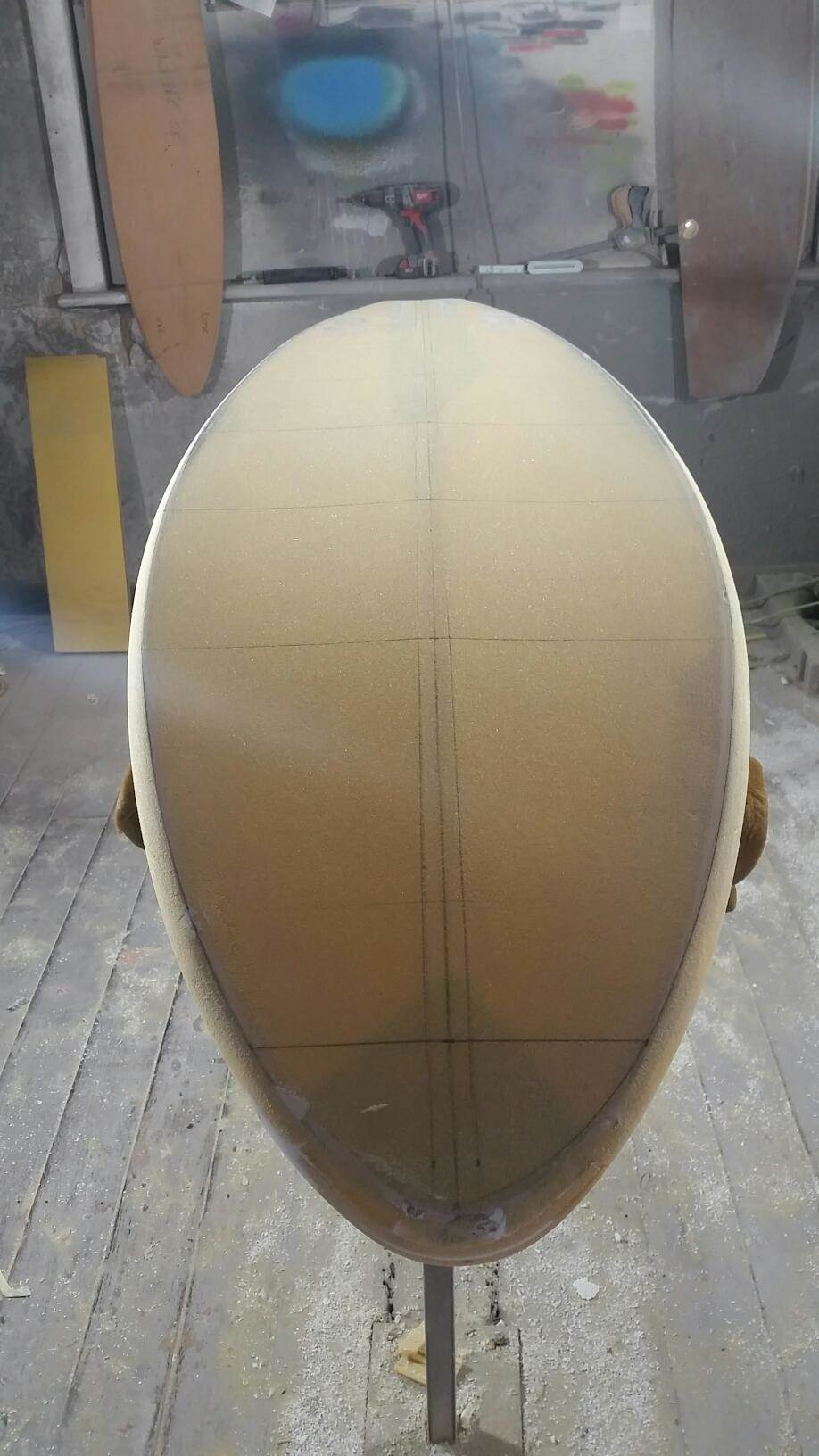 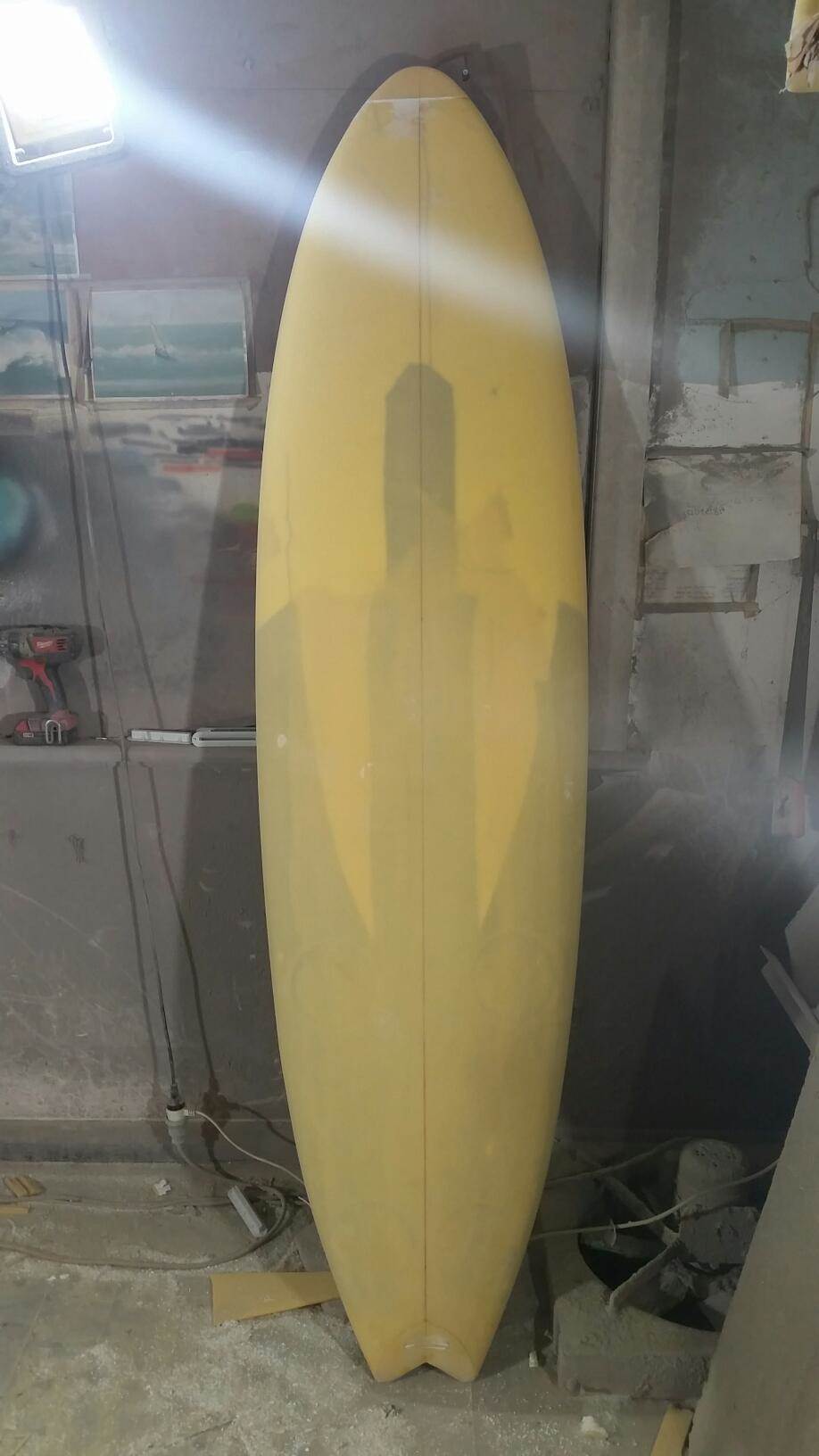 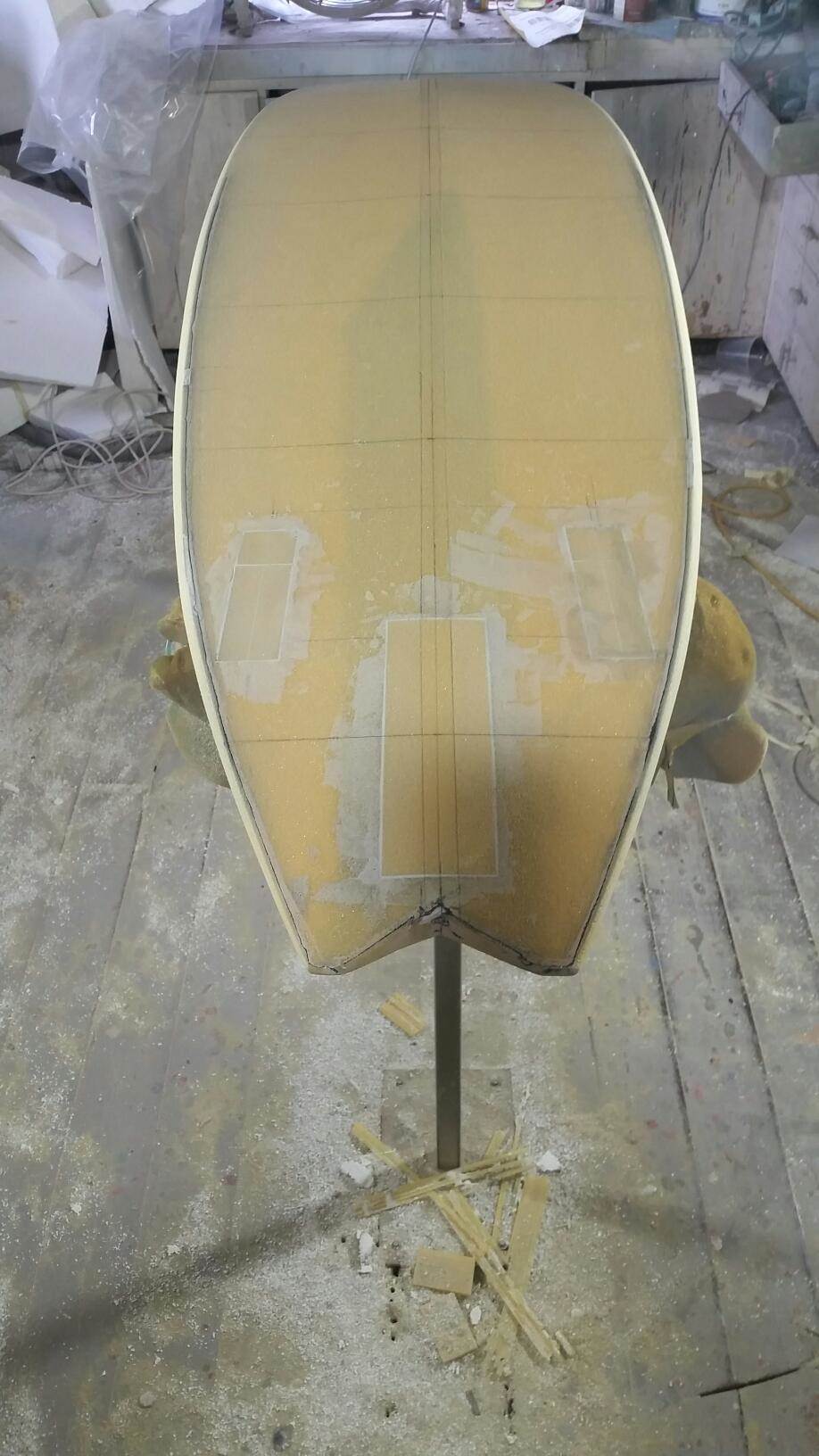 Select to expand quote
mr love said..
Possibly next on the list.......

thanks...
would be my favorite board
Please Register, or Login first...