From Shortboard to Stand Up Paddle

From Short board to Stand Up Paddle

It's commonly said that when any new idea comes along, it's faced with ridicule before acceptance. 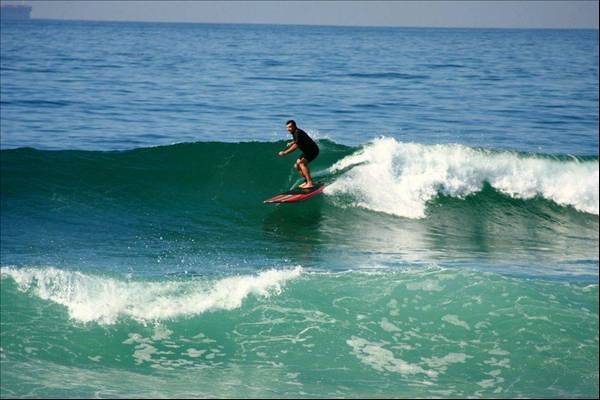 There's no hiding the fact that at some beaches Stand Up Paddle (SUP) has gotten off to a bad start, and the perception of the sport damaged before it even had a go.

Stories abound of surf schools, not really understanding the sport, hiring the boards to unsuspecting beach goers and sending them out into the surf.  The results .. well, people got injured, local surfers got annoyed and the reputation of SUP damaged.

Another all too common scenario was the newbie, upon seeing pictures of pro surfers carving up big waves took his 11 foot SUP out into a break full of short boarders.  He can't surf, never has surfed, and hasn't even got his balance organised.  One attribute he does have is eagerness, another is naivety.  Our newly born paddler causes havoc, spends more time falling, than standing, and again, a "less than best" image of Stand Up Paddle is created.

Greed is present, as are a lot of emotions in a busy working break.  Some days there are only so many waves to go around.   Our character in this scenario is the seasoned surfer, who's transitioned successfully to SUP.  Not much astray so far.  The challenge here is that on a SUP, he can catch waves a lot earlier than others, and boy is he taking advantage of it.  Before long, it's clear he's simply being a wave hog.   Again, perhaps over enthusiasm is at work here, but yet again the image of the paddler is once again tarnished.

The common thread amongst all this is the individual.  Whether driven by greed, excitement or naivety, it's individuals who create a bad image for the whole sport.

The point I'm trying to make here is that many short boarders are missing out on SUP purely because they've psyched themselves out of it based on the actions of a few.  They see these kooks, and have confirmed to themselves that there is no way they're going to be part of that scene.

Well .. maybe time to get a new viewpoint.  Are you into surf for surfing, or for image.  Don't let the kooks put you off the sport.

Sometimes it can be because of a misconception about board size, and how it affects your masculinity.   In windsurfing, for example, there is no ego about "how short your board is" like there is in surfing.  The fact is, that in windsurfing, if you don't have big enough gear for the conditions, you'll look like a goose as you splash around unable to get on the plane.

With some surfers, crew go for the shortest board they can, until they reach a point where they can't even get on a wave.  Whether the bigger board is going to be a mal, or a SUP, some crew sacrifice the thrill of catching a wave for all the wrong reasons.

I've have fallen into the trap of chasing smaller & smaller gear because its lighter, faster, and .. cooler.  Does the prospect of the walk from the carpark to the water with a bigger board cause you anxiety?  Probably not, but if it does, time for a check up from the neck up.    Sheesh .. I've carried my SUP past surfers only to hear comments like "Do you need a skippers ticket for that?".  Gotta have your sense of humour at the ready.

The good thing is, that most shortboarders are pretty cool with SUP as images of crew ripping it up start to spread.   The initial knee jerk reaction is being replaced with a bit of respect, especially as they see SUP'ers catching waves 5:1, on some days.    An increased wave count has gotta make you look up and take notice. 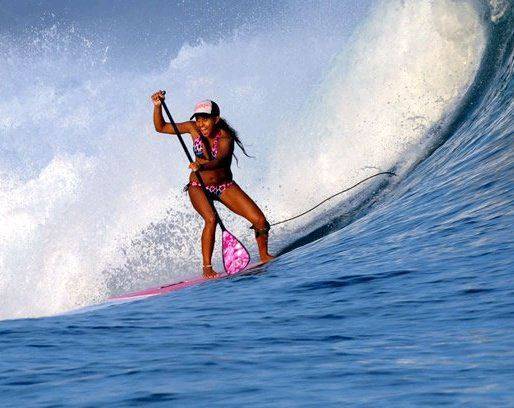 Surfable SUP's range from around 11'4 down to 8'5.  Widths hover around 30".  What this means is that you can surf knee high waves, chest high, waist high waves without much push.. and really surf them.

The buoyancy & shapes of these new boards means speed .. you're planing in an instant, and you can really throw these things around, don't underestimate what's possible.

You'll be stoked at the whole new skill set you learn, and it will improve your short boarding out of sight.  The skills in riding a SUP are similar to your short board, and yet, completely different.    You'll approach your short boarding with a whole new attitude and understanding.  You'll become more confident, and most importantly, you'll be extracting the most fun out of the conditions on offer.

So, give it a go.  What have you got to lose?   Here at seabreeze.com.au, you'll find a huge fan base of SUP, lots of boards, links to all the shops, and a big list of demo days where you can go down to and have a go.

I've met many a short boarder out in the water, and some ask what SUP is like.  I chuck them the board, and give them a go.   They ALL fall off within 30 seconds, and soon remark .. gee ..it's not as easy as it looks!  Balancing on a 9' board in choppy seas takes time, practise and skill.   Do you think this kind of instinctual balance might benefit your short boarding?

Standing up on your board is a great feeling.   For long term surfers who suffer from bad backs and neck problems from years of paddling and craning the neck, SUP has enabled them to resurrect their surfing careers.   Yet another benefit of standing up, is a pretty clear view to the horizon of what swells are on the way.   You can spot the good waves and be in position far earlier than any other prone surfer.

Fact is SUP is here to stay, it's growing, and by it's easy to get along with other surfers without ruining it for everybody else.

If you are going into the surf on a Stand Up Paddle board, be realistic about your skills:  heading out into waves, especially where short boarders are present, without good balance, and wave awareness is asking for trouble.    Just because you're a star on your shorty, doesn't mean the same on your SUP.

For starters, you can't duck dive like a short boarder, so your big board will be free to clobber others.  It's super easy to end up in a situation where you fall off on the inside of a surfer, and before you know it your board is heading for him.  Maybe you'll ding his board, or worst still his head.

Keep away from short boarders when the break is busy. 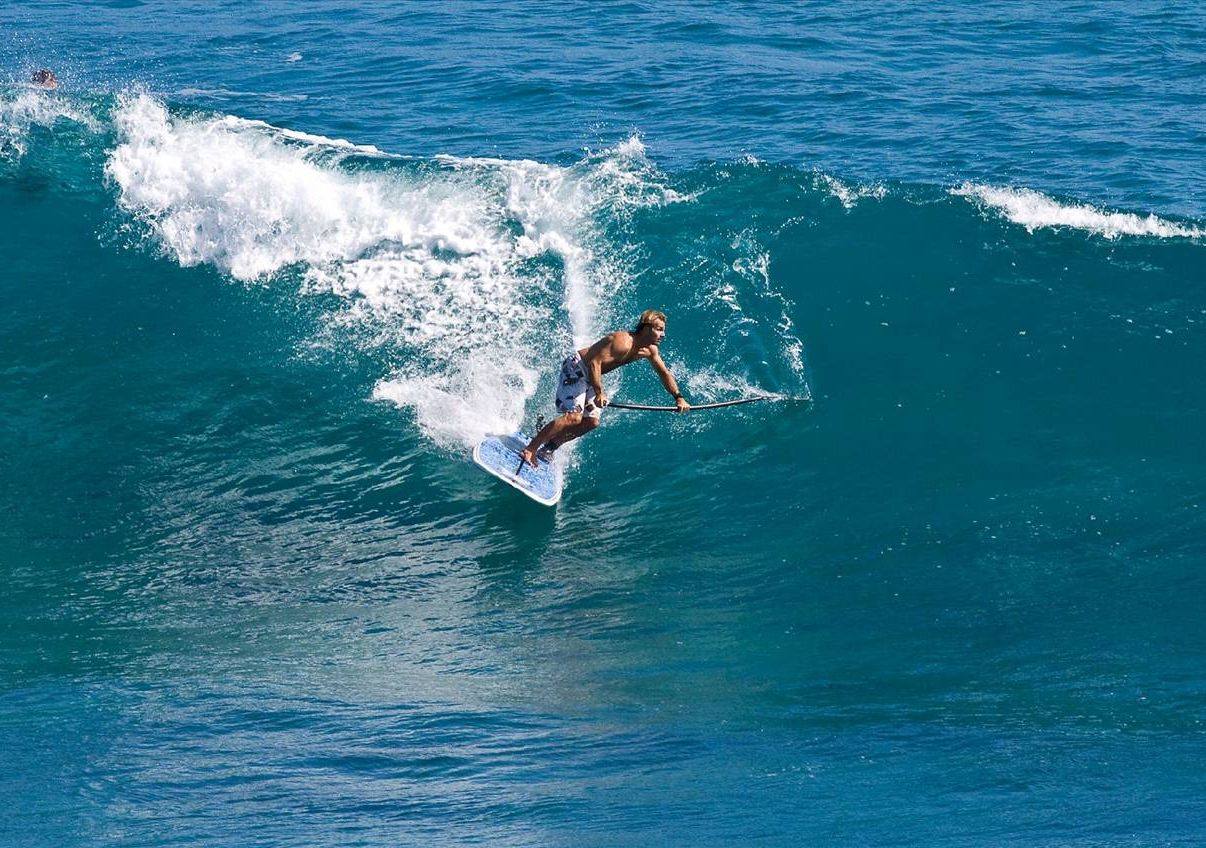 Remember, you're on a SUP.  You can catch waves that short boarders can't. This opens up plenty of opportunities to find breaks that a short boarder simply can't even get started on.

Seek them out, and you'll have 1970's bliss of a perfectly surfable wave, and nobody on it!

Where too from here?  Well, it's easy to get a sample of the sport.

Visit the events section on seabreeze.com.au and you'll find a list of demo days near you where you can check it all out.  These demo days are setup for people exactly like you.

They setup plenty of different boards ready for you to try.   You can compare rockers, tail shapes, width and thickness of all the boards.   You will quickly see that some of the best surfboard shapers are now actively involved in development of quality surf shapes for SUP.

Join "The Breezers" in the Stand Up Paddle Forums where you can discuss every aspect of stand up paddle, from surfing, and the shapes, through to other disciplines of the sport, such as downwinders, and flat water racing.

Amongst all this, remember that first time you ever got up on a board, and felt that incredible feeling of the "free ride" .. of being propelled by mother nature.   Chances are it was on a board that was quite big compared to you current board, but it was enough to make you know you wanted to repeat the experience as much, and as often as possible.

Stand Up Paddling Surfing will never replace your short boarding, but it will supplement and improve it.   It will get you out, keep you fit, increase your wave count & you'll surfing more often.   Surely that's a good thing?

If, like me, you're in it to surf as often as possible, swallow your pride and give it a go.

SUP Australia Tour dates are confirmed for the 2012/2013 season!

With a dizzying array of SUP boards on offer, how do choose which one is right for you?