Over the past few years lure fishing in Australia has exploded.  There are a number of factors which have contributed to this explosion - the ever increasing popularity of bream, bass and barra competitions and the use of lures for these target species; the associated growth in the appreciation of the challenge involved in getting a fish to take a lure; and increasing exposure to the tactics of different countries in chasing certain species (for example Japanese EGI squid fishing) to name a few.

So what are the different types of lures available, how do these lures work and what sorts of things should anglers be looking for when purchasing lures?  This series of articles will provide an overview of these types of questions for entry level lure users.

Surface lures are designed to imitate anything from baitfish or bugs to mice or lizards skipping across the surface of the water to get to safety.  While the immediate reaction might be to think of them primarily being used for aggressive pelagic fish species such as tuna or trevally, they can and are effectively used for species from whiting to trout through to bass, bream and barramundi.


For fresh or saltwater fishing, using poppers is a spectacular way to fish.

Fishing with surface lures is one of the most spectacular and exciting ways of fishing you are likely to encounter no matter what size of fish you are chasing. Due to the lures being retrieved across the surface of the water you are often likely to see the fish chase, and eventually (hopefully), strike the lure.  This results in an explosion of activity on the surface of the water, or if the fish is aggressive enough you will see an airborne fish with your lure hanging out of its mouth. Hoots and cheers usually follow as your rod loads up and your reel starts to sing!

So what are some of the types of surface lures available and how do they work?

One of the most popular surface lures is the popper.  Poppers have a cupped face at the front of the lure which is designed to push out a surge of water on its retrieval.  The splashing water imitates the sight and sound of a fish jumping out of the water when it’s startled or being chased or if you’re fishing for species found in rivers or lakes it can imitate the sound of a bug or lizard falling out of a tree and trying to swim back to the safety of the shore.  These sounds fire up predatory fish who think there may be a meal swimming nearby.

When retrieving a popper the basic technique is to ‘bloop’ it across the surface.  Depending on the size of the lure this could mean making small twitches where you twitch the tip of the rod down in order to make the face of the popper splash out water.  If using larger poppers then the action of the rod will need to be increased incrementally based on the size of the lure.  For example, big GT poppers need to be really worked to push out a large amount of water, in this case the twitch won’t be a large enough action to create the spray you need.

The other popular type of surface lure is a stickbait.  Stickbaits are designed to skip across or just under the surface of the water and while they generally do not create the same splash as poppers the streamlined body of the lure darts and flicks through the water looking like an alarmed baitfish.  Stickbait users can try a steady and constant retrieve which jumps across the surface of the water or the popular ‘walk the dog’ technique will have the lure moving consistently from side-to-side across the water. 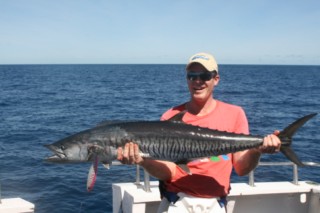 The surface strike of a Montebello Island mackerel is something to behold.


Two simple things which can help you get the most out of your surface lure actions are the use of leader and of clips.

Monofilament lines float whereas braided and fluorocarbon lines sink.  Given you’re using a lure which is designed to be on the surface of the water the use of sinking lines can upset the balance of the lure and have a negative effect on it, so if your budget and the species of fish you’re chasing allows it you could consider respooling to mono line.  Otherwise choosing a mono leader over a fluoro leader can be an effective workaround.

Using clips and clip swivels can also influence the weight balance of the lure so it could be worth dropping the swivel and using a loop knot instead.

These are a few tips on two of the more popular types of surface lures and how you might start to add them to your arsenal of fishing tactics.

Not getting the casting distances you want? This article provides a few pointers that can help maximise your effectiveness in this area of fishing.

How to take photos of your fish catch

Fishing
Which leader line should I use, and why?
News Articles Events