Which leader line should I use, and why?

The idea of tying a different type of line onto the end of your main fishing line probably sounds crazy to the beginner fisho, but it is one of fishing’s most elementary tactics and can make a significant difference to your fishing success.

A leader is a length of line attached to the business end of your main fishing line.  It’s this separate length to which rigs or lures are tied.  Connecting the two lines is generally done by tying the two pieces together with a knot/s or by tying each line to the separate ends of a swivel with that acting as the joining mechanism between the two.

There are two main reasons for using leader line.  Firstly it can be used to provide increased protection against the sharp edges of teeth, rocks, reef or shell-covered pylons.  The other main reason is because some fishing lines are highly visible underwater.  Using specific types of leader can make it difficult for fish to see the line connected to your bait or lure.  This then increases your chances of catching them!

So what then are the types of leader available and what’s the difference between them?

There are two main types of leader generally used by anglers – monofilament leader and fluorocarbon leader.  Both of these have differences between them and are used by anglers in differing situations.

Monofilament line got its name by being made of one single strand of line - mono (single) filament (thinly spun thread).  Standard monofilament leader can be a cheaper option for putting leader onto the end of your main line, but as with all things in fishing if you want to spend more money the option is always there!

The general characteristics to be aware of with monofilament leader are that it absorbs water, it stretches, it has good quality abrasion resistance, it absorbs sunlight and as stated above it’s generally quite cheap.

Depending on the type of fishing you are doing this can bring positives and negatives.  If you are fishing in reefy territory where there’s a likelihood of getting snagged, the price of that leader is going to be a benefit to you through its abrasion resistance.  If you’re fishing with surface lures the line’s water absorption makes it heavy and it will start sinking which will ultimately have an effect on the action of your lures as will the line’s visibility due to it absorbing sunlight.  If you’re trolling lures, the stretch of the line will help act as a shock absorber when the lure gets hit. 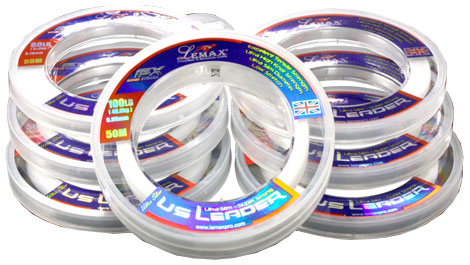 Take me to your leader... which one though?!

So then the usual situations for using standard monofilament leader are when bait fishing (surf, reef, boat); deep water jigging; and trolling (don’t forget a short wire trace if you’re hunting fish with teeth).  And if you’re wondering what brand of leader to buy then Penn 10X, Jinkai, Black Magic, Lemax Ex-Leader and Suffix Tritanium are places to start.

Fluorocarbon leader is still a single filament line but its make-up is slightly different and the first thing this affects is the price.  Fluoro is significantly more expensive than standard monofilament leader.  Having said that fluorocarbon does bring a large number of differences too.  Fluoro is less porous than mono which means it absorbs little water, it sinks, and it also has a ‘refractive index’ (it’s just what they call it!) very close to water which results in sun shining through the leader therefore making it difficult for fish to see it.  The leader is also more abrasion resistant and it has a low level of stretch.

Again this will bring different advantages and disadvantages to your fishing.  If you’re lure fishing in extremely clear water, using leader which is difficult to see underwater will only make your lure more appealing to a fish.  As the leader doesn’t absorb water or sunlight this also ensures the line has a longer shelf-life and it won’t break down as quickly as monofilament line.  The low stretch nature of the line will also help to feel smaller bites.

Some general situations you might want to use fluorocarbon then are when you are fishing around snags or pylons when you can’t afford the line to stretch or you need the extra abrasion resistance; when you need to add finesse to your lure or bait presentation and remove the visibility of your leader or as an alternative when you’re using diving lures which are sensitive enough to be influenced by the floating characteristics of mono leader.

If you are unsure of which fluoro leader to use, depending on your budget Berkley Vanish, Sunline FC, Black Magic and YGK brands of leader are all places to start.

So there are a few starting points to consider when choosing which type of leader to use and the pros and cons of using either style.  As with all things in fishing people will hold differing opinions on what is best to use in this or that situation.  But armed with some basic knowledge on the characteristics of the leader types you can begin to experiment and work out what is best for your type and style of fishing.  Get out there and give it a go.

How to take photos of your fish catch

Some do-s and don't-s of charter boat fishing

Tips for getting the most out of fishing charters

Changing your hooks and split rings can have a positive result on fish retention - this article looks at the hows and whys of this issue.