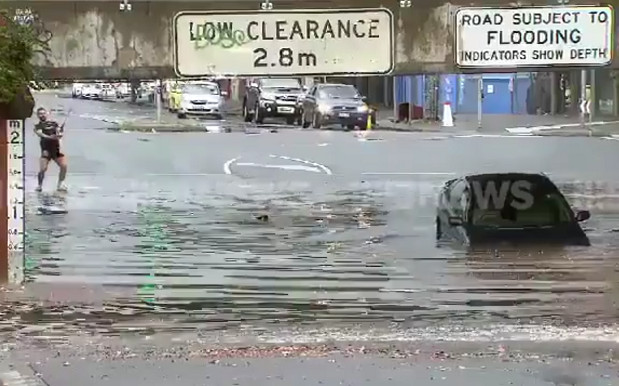 It's been a bit wet in Melbourne this week, and when this guy and his mates went down to the local overpass for a bit of rubbernecking, they took a fishing rod.

When they arrived, news crews were on the scene filming the obviously flooded section of road under the York Street ridge, because a car had just driven through it, floating a little further down stream. Police blocked off the road, and everyone was just standing around. Next thing, the Police leave to speak with someone, another car drives down the road and cautiously proceeds straight into the water again!

Cue Mr Paris J. With the fishing rod. News crews caught him pretending to cast out and catch the bloke in the car, yelling after he'd just tried to stop the guy from driving in there in the first place.

Later in an interview with Channel 9, he admitted he's come up short on the last few fishing trips around Brighton. "I almost caught a Camry yesterday though" he joked.

Perhaps it's his choice in fishing spot. Maybe next time buddy!