Would you buy a boat made by Toyota? 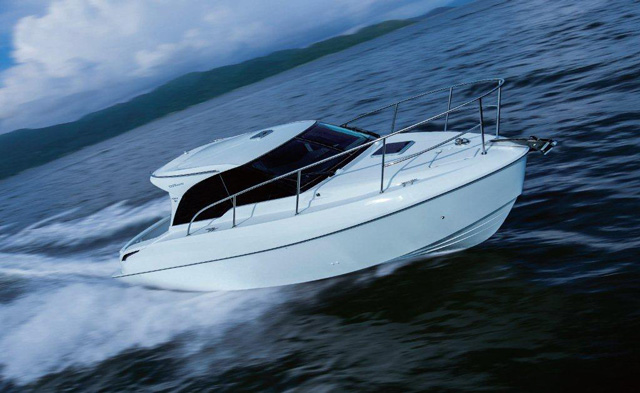 Sleek looking and with a revolutionary modern design, the Ponam 28-V by Toyota.
Car manufacturers have always built boats. Some even starting building boats back when cars hadn't been invented. Now boats are seen as luxury items, and with luxury comes a price tag. Toyota are keen to get in on the action, and this week released details of the production version of their Ponam-28V.

Priced at $317,000 AUD which is a drop in the ocean compared to the price tag some auto manufacturers slap on their watercraft, the Ponam-28v is an interesting collaboration between Toyota and Yanmar (the well known engine manufacturer). It's got a single inboard drivetrain that works in conjunctions with bow thrusters, an interesting new construction method and all the luxury features you might expect in a 28ft coastal cruiser.

Setting it apart from the rest, is the new construction technique using a resin infused fiberglass outer and inner layer, sandwiching foam and carbon fiber. Running down the length of the hull are stringers helping keep the boat rigid, but thanks to the intricate moulded design of the hull - Toyota promise that the boat rides through chop smoother than any other. A picture tells a thousands words when it comes to how they've designed the hull structure - so check it out !

Also setting it apart, is a 'pilot support system' which automatically maintains the boats position on the water, controlling bow thrusters to keep the bow steady, and sending commands to the engine for forward and aft control. This feature is quickly becoming standard in luxury megayachts, but until now it's been a rarity in smaller cruisers.

If you would like to get your hands on the new Ponam-28V - you better be quick! Toyota are only planning on making 24 a year and most are destined for the Japanese market. You never know though, Toyota have said they're pushing their marine division hard in the next few years - you might be heading down to the Toyota dealership one day to buy a BOAT!