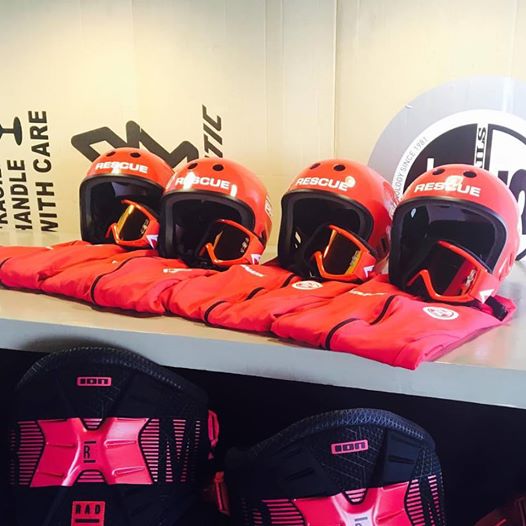 Four helmets, for four crazy windsurfers who will be entering on a single board!
With more than 1000 windsurfers competing in the worlds largest windsurfing race, called Defi Wind - one has to be different to stand out from the crowd. So when three blokes designed a special board so all three of them could race, they certainly turned a few heads!

Last year they entered in a trio, all sailing one board and doing pretty well - in addition to amusing the internet with their antics. This year, they're back, and they've put a leash around the neck of a fourth sailor to made it a 'Quadem'. They've just released a teaser in the leadup to the event - so we can't wait to see what they come up with on the day!

Aside from the brightly coloured wetsuits, and matching sails, the sight of four rigs on a single board is going to be unique to say the least. Tandem windsurfing is old news, with even a few production boards coming out over the years to satisfy the curiosity of those who wondered what sailing with a mate would be like. Four on one windsurfing board is another story, and it will be quite amazing if these guys come up with a controllable board on their first attempt.

Did you know that this is NOT the most rigs to ever be mounted to a single windsurfing board? The world record is an 18m long board, with 9 rigs! Set in the Netherlands way back in the heyday of windsurfing, stunts they performed with it included towing a guy on waterskis, performing a gybe (yes, with 9 on one board!) and best of all, taking out the middle three rigs and having other sailors jump OVER the board!