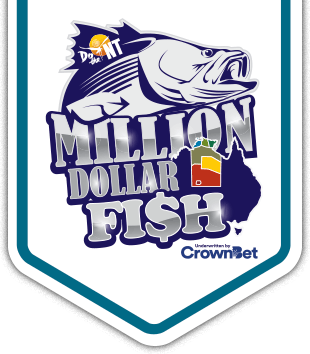 Just 5 days into the event window, one lucky angler has caught a barra worth $10,000 in cash!!! That means there's still 99 out there, plus one which is worth a cool million bucks.

Fishing is one of the Northern Territories biggest tourism drawcards, and right now it's got 2 million more reasons to book a trip. Backed by CrownBet and the NT Government, the Million Dollar Fish competition event window has opened on the 1st October, with 100 Barramundi tagged with special plastic tags and released back into the territories best fishng spots. Find a tag - and you've got yourself an instant $10,000 in cash, or if you're really lucky, you'll catch the one fish worth $1,000,000!

Yep, you read that correctly, you could win cash just by going fishing in the NT, and it's free to register the event. Just signing up could win you prizes, even if you don't visit the territory this summer. There's another $91,000 in prizes going to random entrants including a heli-fishing tour, quad bikes, eskys and a camper trailer. Seriously, all you have to do is register on their website here.

Already, one of the fish has been caught by a man in Darwin, who almost threw it back! "I was fighting the fish and thought it looked to be undersized so I was going to get rid of it as I usually get meteries all the time," he said. "I tried to flick it off but it wouldn't as the hook was caught in the side of his mouth so I pulled him up, laid him down, flipped him over and that's when I saw the tag."

Want to get in on the prizes? Jump online and register in one of Australia's best tourism initiatives, and book a summer holiday up to the Territory to go fishing!